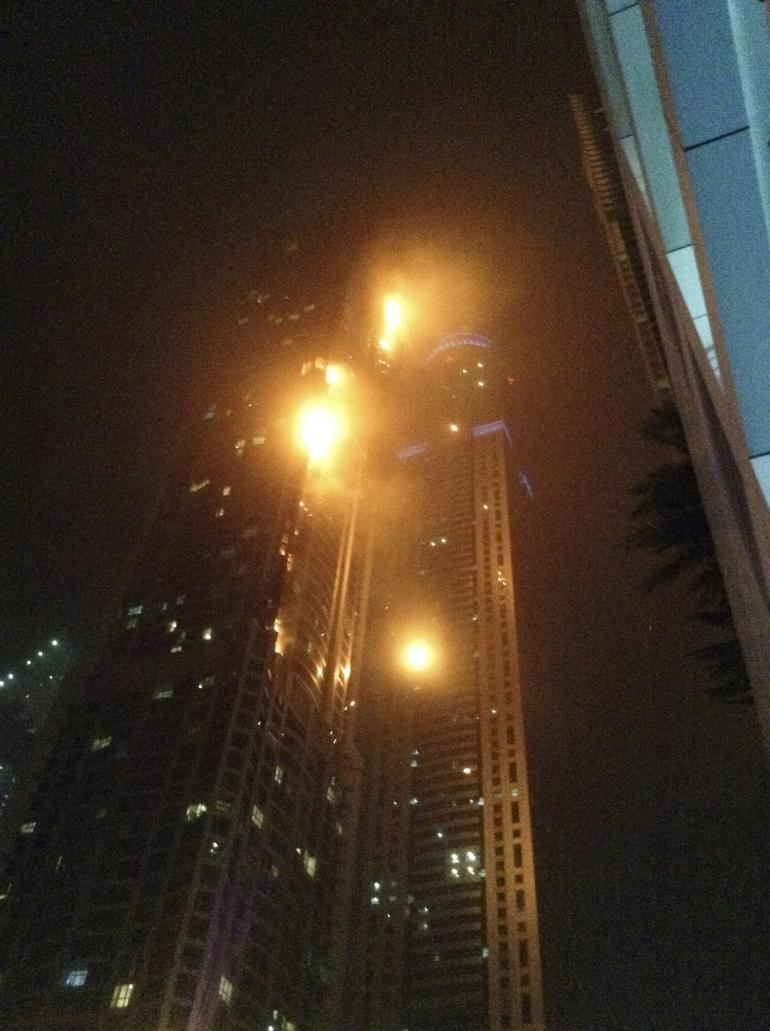 DUBAI (Reuters) - Hundreds of people in Dubai were evacuated from one of the world's tallest residential buildings on Saturday when fire swept through The Torch, a 79-storey skyscraper, residents said. A witness said flames shot out from two sides of the building as glass and metal rained down from near the summit of the structure, which stands more than 330 meters (1,082 feet) tall. Medics said there were no casualties. At least a dozen fire trucks were able to extinguish the blaze several hours after the fire alarm went off around 2 a.m. local time (2200 GMT Friday). However, some residents said they had been told by staff that the building's fire alarms did not immediately sound and that the reception at The Torch was alerted to the fire by staff in an adjacent building. "They (the Torch receptionists) got a call from Princess Tower telling them the building was on fire. The alarms were not operating automatically," Archibald Jurdi, who lives on the 76th floor, told Reuters. Reuters could not independently verify the status of the fire alarms. The building manager could not be reached for comment. Residents said the fire had been fanned by high winds, dislodging chunks of metal and raining glass down on the area below the building, including onto a nearby road more than 100 meters (330 feet) away. Traffic in the area was diverted and residents of two other nearby buildings in the emirate's Marina district, home to thousands of expatriate professionals, were also evacuated, the witness said. Many of those standing outside the building were dressed in pyjamas, with others in evening dress as they returned from the city's many bars and restaurants on a weekend. One woman, who did not give her name, stood on the street crying, saying she had rushed back fearing for her belongings after a friend contacted her about the fire. Her fear turned to relief when she saw the lower floors where she lived were not affected. Residents of neighboring towers were returning to their homes around 0430 local time, but residents of The Torch were told they would not be allowed back into the building until the fire officials gave approval later on Saturday. Residents of upper floors that were most affected were told it would be days before they could return. Dubai civil defense officials did not immediately respond to requests for comment, and the cause of the fire remained unclear. Dubai is one of seven emirates that make up the United Arab Emirates (UAE), a Gulf Arab trade and investment hub.