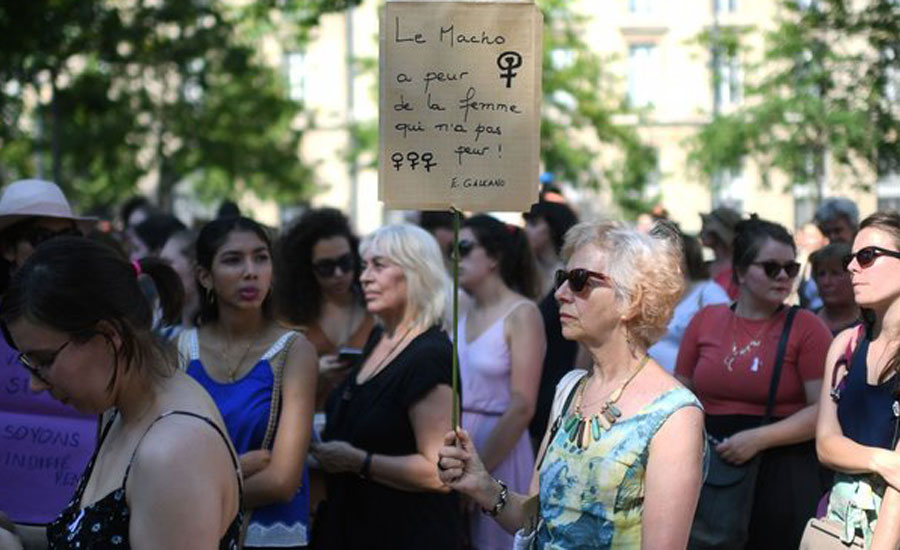 PARIS (Reuters) - Hundreds of protesters gathered in central Paris on Saturday to raise awareness and demand tougher action on femicides in France. Yelling “Enough” and carrying signs reading “Stop femicides” or “The planet needs women alive”, the crowd took to the Place de la Republique square as part of the demonstration organized by various women’s rights NGOs to protest the rate of femicides, the killing of a woman by a man because of her gender. The women of all ages and a few men also observed 74 seconds of silence in tribute to the 74 women allegedly killed in France so far this year, according to data collected by Facebook group “Femicides par compagnons ou ex” (Femicides by partners or exes). It said four were killed this week. According to Interior Ministry figures, 130 women were allegedly killed in 2017 by their husband or partner, up from 123 in 2016. “It’s a massacre,” Julie Gayet, a French actress and partner of former French President Francois Hollande, said at the protest. “We need to raise awareness on what’s happening today, which means that despite society’s evolution, there’s a step backward, and even more women are dying today.” In an interview with weekly Journal du Dimanche, French Gender Equality Minister Marlene Schiappa said the government in September will launch a broad consultation to draft new measures to prevent femicides. The consultation will involve the interior and justice ministers, advocacy groups and other NGOs. She said the government will also launch campaigns to make sure domestic violence cases are reported. “No country has reached zero femicides, but I think that if we all work on it, we can collectively do better on the long run,” she said. In light of the numbers shared by “Femicides par compagnons ou ex”, women’s advocacy groups in France have grown more vocal in recent days demanding the government stick to its gender equality promise and act decisively against domestic violence.