Hundreds take to streets in Shikarpur against PM Abbasi 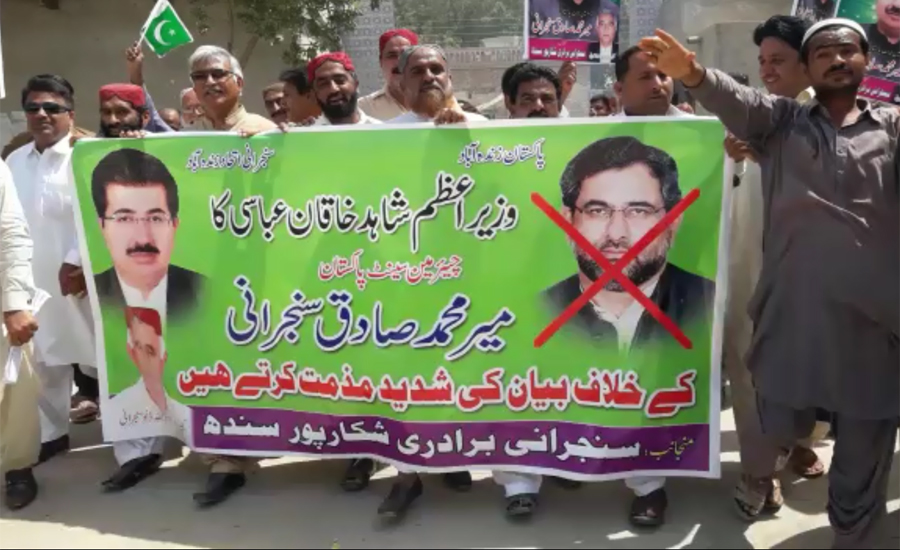 Hundreds take to streets in Shikarpur against PM Abbasi

SHIKARPUR (92 News) – Hundreds of people on Sunday took to the streets on Sunday against Prime Minister Shahid Khaqan Abbasi over his remarks against newly-elected Senate Chairman Sadiq Sanjrani. Protesters strongly condemned the remarks of PM Abbasi and demanded the PM Abbasi to take his words back against newly elected senate chairman. They also threatened to hold protest demonstrations across the country on large scale against the premier. A large number of protesters raised placards inscribed with slogans against PM Abbasi and in favor of Mir Sadiq Sanjrani, the newly elected senate chairman on the occasion. Earlier, PM Abbasi had expressed concern over horse-trading and 'money-bought' chairmanship in Senate. We got a chairman who was not known in the political circles before, he said. He while further reinforcing his party’s stance said that those who had been elected as senators or as the Senate Chairman using their riches must be sent packing as they could not represent Pakistan. “Our opponents are disturbed these days over my remarks about Senate chairman. I repeat that people of Pakistan do not accept the seats obtained using money. Those who have become senator or Senate chairman using the money, cannot represent Pakistan. These people need to be sent packing,” the prime minister said addressing the inauguration ceremony of Chaudhry Abdul Hameed Cardiology Center at District Headquarters Hospital and two high-pressure gas pipelines of 12 and 16-inch diameters for Sargodha city.