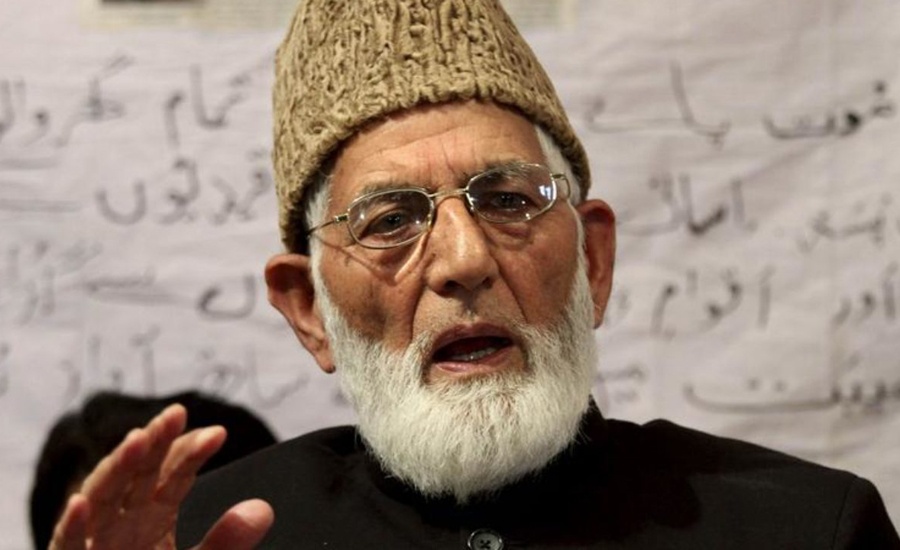 SRINAGAR (92 News) – All Parties Hurriyat Conference Chairman Syed Ali Gilani has thanked Pakistan Prime Minister Imran Khan for raising the Kashmir issue with US President Donald Trump. In a statement on Monday, he said that the United States should play its role for the resolution of the Kashmir dispute. According to Kashmir Media Service, All Parties Hurriyat Conference Chairman Syed Ali Gilani urged India to take concrete steps for permanent resolution of the long-pending Kashmir dispute to save the future of coming generations. He said that the Kashmir dispute has consumed more than three generations of Kashmiris and still continues to threaten the existence of yet another generation. He strongly reacted to the threatening statement of Indian Defense Minister Rajnath Singh and said that Kashmir was Himalaya-like reality and such utterances from Indian rulers were not only far from reality but also a sign of highhandedness and arrogance. Tehreek-e-Hurriyat Jammu and Kashmir Chairman Muhammad Ashraf Sehrai, in a statement, expressed concern over the arrest of party worker, Khalid Hussain in Kulgam and deteriorating health condition of Sajjad Ahmad Butt at Central Jail in Srinagar. The family members and relatives of pro-freedom activist, Sarjan Barkati, today, staged a protest demonstration outside Jamia Masjid in Shopian to press for his immediate release. The protesters were carrying placards and posters inscribed with slogans against Barkati’s illegal detention.