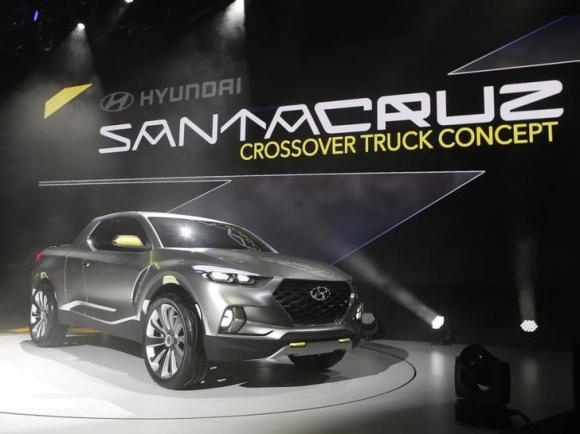 SEOUL - South Korea's Hyundai Motor (005380.KS) aims to boost its US sales by 4.7 percent this year, ahead of the industry's projected growth rate, despite a consumer shift to SUVs and pick-up trucks. Sales of Hyundai's mainstay sedans, the Elantra and Sonata, have slowed in the United States as consumers take advantage of lower fuel prices to switch to less fuel-efficient larger vehicles, strongholds of US and Japanese firms. Hyundai said on Tuesday it aims to increase its US sales to 760,000 vehicles this year, from 726,000 last year, and will launch its revamped Tucson SUV in the US market in the second quarter. Its planned growth rate would be more than double the expected industry growth rate of 2 percent. "The 5 percent target looks challenging. There are not many Hyundai SUVs to sell in the US," said Ko Tae-bong, auto analyst at Hi Investment & Securities. He said supply is tight for Hyundai's SUVs, as it does not produce the Tucson in the United States, and relies on Kia's US factory for production of Santa Fe SUVs. Hyundai also does not sell pick-up trucks. Reuters reported last week that Hyundai is in talks with the state of Alabama to build a new assembly line next to its current line in Alabama. A person familiar with the matter told Reuters on Monday that the new Hyundai production facilities, which plan to start production in April 2017, will make Santa Fe SUVs, although that is subject to change. Hyundai Motor Group chairman Chung Mong-koo left for the United States and Mexico on Tuesday for a five-day trip to visit factories and design centers for both Hyundai and Kia, and the site of Kia's new production plant in Monterey, Mexico. Ko said Hyundai should make Tucson SUVs and pick-up trucks in the United States to increase market share and reduce reliance on sedan sales. A Hyundai executive said last week the carmaker was considering producing pick-up trucks, but added that there were "many hurdles." - Reuters