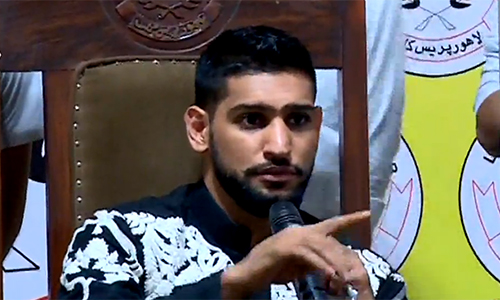 LAHORE (92 News) – Pakistan-born British boxer Amir Khan has said that he will resume training in September. Addressing a press conference at the Lahore Press Club on Monday, he said that he would form a boxing academy. “There is much talent among the youth. I will train the Pakistani youths in a boxing academy. We have to bring forth the talent of Pakistani youths. People love me too much. I am proud to be a Pakistani,” he maintained. Amir Khan said that several big names in sports were born in Pakistan. “I am very happy to visit Pakistan and the Lahore Press Club,” he said. His wife Faryal said that Amir has changed a lot after the marriage. Later, Amir Khan was awarded life-time honorary membership of the Lahore Press Club.