I have come to Gilgit to join hearts, not for container politics: Prime Minister Nawaz Sharif

I have come to Gilgit to join hearts, not for container politics: Prime Minister Nawaz Sharif

GILGIT (92 News) – Prime Minister Nawaz Sharif said that he had come to Gilgit-Baltistan to join hearts after reducing distances, not to do the politics of the container. Addressing a public gathering in Gilgit on Tuesday, he said: “I believe in the service of the people and do not tell a lie. We will change the destiny of the youth.” The prime minister said that earlier the Gilgit-Baltistan Council meeting was held in Islamabad, but now it would be held in Gilgit-Baltistan. “My hearts throbs for the people of Gilgit-Baltistan. Development projects are being fast executed. A road has been carpeted between Khunjrab to Raikot which will be expanded to Thakot and then Islamabad,” he announced. 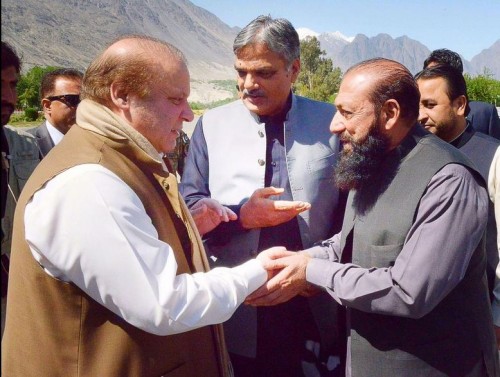 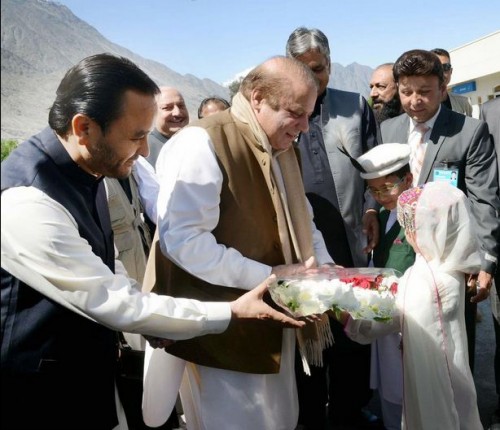 Nawaz Sharif announced several projects, including the establishment of Baltistan University and an increase in flights for Skardu and Gilgit. He said 175km Gilgit-Jaglot Road would be constructed at a cost of Rs 40 billion. “A tunnel is being constructed at Attabad Lake at a cost of Rs 27 billion which will ensure an access to Khunjrab.” He said the Diamer Basha Dam will be country's biggest project which will change the destiny of Gilgit Baltistan. “The project costing Rs 1400 billion will add 4500 megawatts of electricity to the national grid. Besides, work will also be started on Bunji and Dasu Dams.” The prime minister announced the district status for Shagar, Kharmang, Hunza and Nagar. He said Pakistan-China Economic Corridor project envisaged construction of road from Khunjrab to Gwadar besides a rail service. Nawaz Sharif announced that youth of the area will be given loans worth Rs two million to start their small businesses. He said quota of Gilgit Baltistan in laptop scheme will also be enhanced. He said that he had constituted a committee on the constitutional status of Gilgit Baltistan. Nawaz Sharif also distributed laptops among the university students. Earlier presiding over a meeting of Gilgit-Baltistan Council in Gilgit, Prime Minister Nawaz Sharif said Gilgit-Baltistan would be brought at par with developed areas of the country. The prime minister directed the authorities concerned to spend development funds in a transparent manner. “Corruption will not be tolerated under any circumstances.” 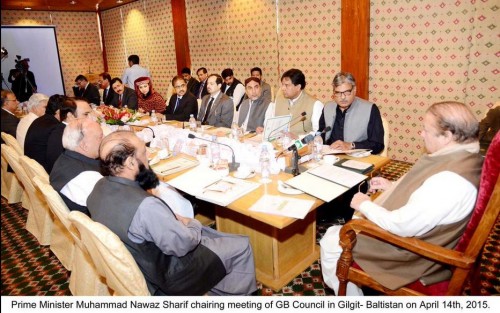 He said that tourism will be promoted in Gilgit-Baltistan and mineral resources will be exploited for the development of the area. He said it is priority of the government to conserve and promote forests. He directed that special attention should be given to export of fruit and dry fruit. “The government will provide funds for the purpose.” The Council thanked the prime minister for providing Rs 40 billion as subsidy on wheat to Gilgit Baltistan. Governor Gilgit Baltistan Chaudhry Barjees Tahir gave a briefing on development projects. He said a special force was being established for the security of Shahrah-e-Korakaram. He said that a policy for protection of forests had been formulated for 30 years. The meeting was also briefed on Timber Policy prepared in consultation with all the stakeholders. The Gilgit Baltistan Council approved the budget for FY2014-15. The meeting also passed the Gilgit-Baltistan Tahafuz-e-Pakistan Bill 2015.