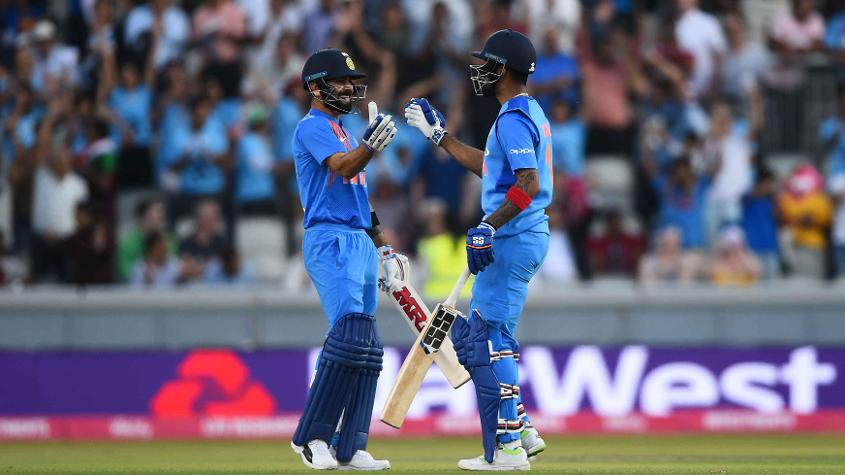 NEW DELHI (92 News) – India top-order batsman expects the wrist-spin duo of Kuldeep Yadav and Yuzvendra Chahal to trouble the English throughout the series.
Kuldeep Yadav hogged all the headlines, justifiably, after his five-for stymied England in the first Twenty20 International, but KL Rahul had an equally crucial role to play in India’s eight-wicket win, his 101* making sure there were no jitters in the Indian chase. It was a welcome century in international cricket for Rahul. He has four of them in Tests and one in one-day internationals to go with the two in T20Is now, but it was back in December 2016, in a Test against England in Chennai, that he had scored the last of them. On that occasion, he missed a chance to get a double-century as he was dismissed on 199. He had scored 14 half-centuries in international cricket since then before breaking the hoodoo in Manchester. “Trust me, I know (about the run),” he joked before the second T20I against England, to be played in Cardiff on Friday, 6 July. “Quite honestly, I didn't know what to make of it, whether I was in form or out of form. “I kept getting the fifties and was getting out. I was batting well, but somehow, I couldn't get to the three-figure mark. So it was quite frustrating. Being in and out of the team, injuries, and sickness, it all was playing on my mind and kept frustrating me even more.” “I realised somewhere down the line that it is still better than getting out on single figures and stopped worrying about the three figures. I wanted it really bad and am very happy that it came here in England, in the first game of the series, and hopefully I can carry that confidence forward and use the form and make it big." The Indians have stressed on flexibility in the lead up to the ICC Cricket World Cup 2019, and have been moving batsmen around in the order. As a result, with Shikhar Dhawan and Rohit Sharma out as openers at Old Trafford, Rahul batted at No.3 ahead of Virat Kohli and Suresh Raina. “It has been made clear that there will be few changes in the team and as a batting unit, we need to be flexible in our heads to be able to perform any role or responsibility that has been given to us,” said Rahul. “We are all working towards it. We might want to promote MS Dhoni or Hardik Pandya if we get a good start, to go and get us a few sixes or get the run-rate up. So we will be flexible keeping in mind the World Cup. “When you sit out, you realise that when you get the opportunity how important it is to use that opportunity, not only as a player individually but also for the team. When you get a chance to play, if you help them win a game, then the team will start believing that the player can also do this for the team. So building that confidence for yourself and the team is very important.” He would ideally open, said Rahul, but No.3 worked fine for him too. “That's where I would love to bat and I have always batted at the top of the order. Nos.1 and 2 are what I am most comfortable in. Shikhar got out early (in Manchester) and it felt like I was opening the batting,” he said. “It gives me a chance to get my eye in and even use the Powerplay. Whatever chances I get I should make the most of it and I am very happy that I got to bat up the order.” Outstanding as Rahul’s innings was, it was Kuldeep that set up India’s win, and it’s Kuldeep that England are most focussed on in the lead up to the second game. “I don't think it’s just England. A good wrist-spinner is a good wrist-spinner against any opposition,” said Rahul. “With the kind of skill and quality that Kuldeep and Yuzvendra Chahal have, it's always going to be hard for a team that doesn't play spin a lot. “What Kuldeep did was special as getting a five-for in a T20 game isn't easy. You can be bowling well but most times he will get two or three wickets and give 30 runs. But he kept at it. The way Chahal and Kuldeep are bowling, they're going to be dangerous throughout the series.”