I would love to go to the World Cup: Dale Steyn

I would love to go to the World Cup: Dale Steyn

CAPE TOWN (92 News) – Dale Steyn, the South Africa pacer, admitted that he was aiming for a place in South Africa's ICC Cricket World Cup 2019 squad, but added that more than being a part of the 50-over tournament, he would love to see his side lift the cup.

The speedster last featured in a one-day international game back in October 2016, when hosts South Africa defeated Australia 5-0. "It's so bloody long ago I can't even remember it," said Steyn of the last ODI he played. "What I do remember is that we won 5-0. And it's a team game. And that's all that matters." South Africa are gearing up for the limited overs series against Zimbabwe, starting on Sunday, 30 September, with Steyn a part of the 14-man squad. Injuries have kept him out of action and, in his absence, pacers such as Kagiso Rabada and Lungisani Ngidi have cemented their place in the side. Despite coach Ottis Gibson calling him one of the two best pacers in the country, it will be a challenge for the 35-year-old to make a comeback and play every game.

"It's good to have challenges," said Steyn on Thursday. "I think Lungi and KG would also appreciate the fact that I'm coming back into the side because they would also know that their positions are under threat. We all are. You can only take a handful of these fast bowlers to the World Cup and we're all fighting for a spot. "Everyone wants to go to the World Cup and I would love to go to the World Cup, but individually I would love nothing more than to see the Proteas win a World Cup," he added. "And if that means that I don't go, then so be it.
Dale Steyn took one of the best catches in World Cup history to remove Ahmed Shehzad in South Africa's CWC15 clash against Pakistan in Auckland.
"I did my job coming in here, pushing guys to perform at their best. Pushing KG, pushing Lungi, pushing Andile, all these guys. I'm just happy to be here, playing cricket, and challenging them." Fit-again Steyn was recently a part of Hampshire, where he played four Twenty20 games and three first-class matches in England. On his return to action, he was feeling "really good", he said. 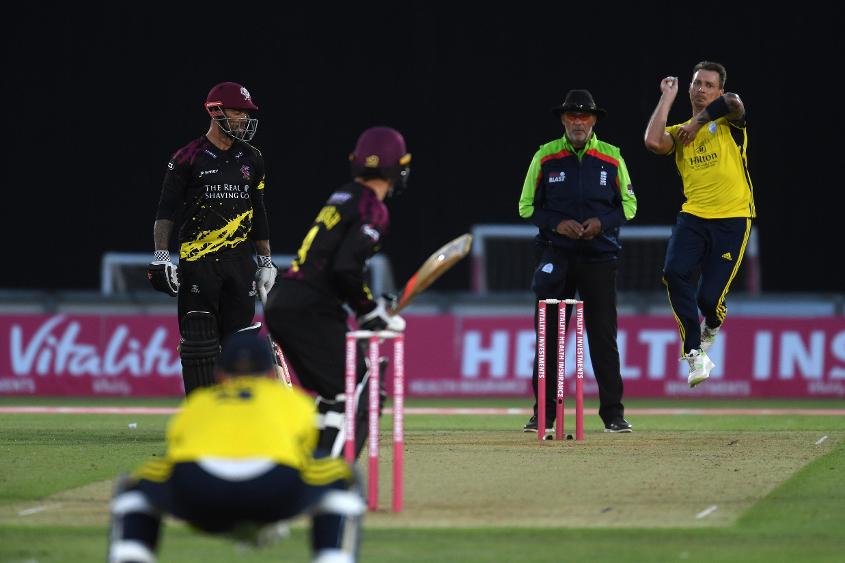 "Having played my last game only two weeks ago for Hampshire, I feel like I'm going, I'm flying," he said."But white ball is a whole new challenge. I've been playing red ball in the UK, so white ball is going to be a different challenge. All the skills, batters coming at you, the Powerplays all of that kind of stuff. And I haven't played white ball international cricket for quite some time."