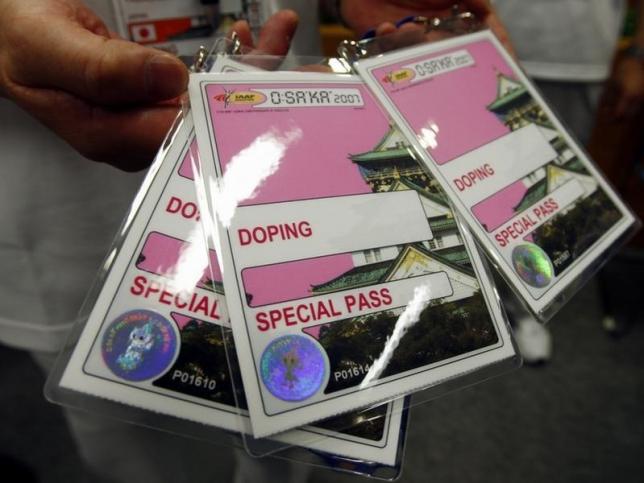 LONDON - The world governing body for athletics (IAAF) fought back on Tuesday against media reports of suspected widespread doping in the sport, rejecting accusations it failed to investigate dubious drugs test results properly. The IAAF said the reports by Britain's Sunday Times newspaper and Germany's ARD/WDR broadcaster, which implied cheating was rampant in athletics, were based on "guesswork" and not facts. "The IAAF takes the allegations published by The Sunday Times and ARD very seriously and has investigated them thoroughly," the IAAF said in a nine-page statement. "The published allegations were sensationalist and confusing: the results referred to were not positive tests. In fact ARD and The Sunday Times both admit that their evaluation of the data did not prove doping." The sport of track and field has been plagued by spectacular doping cases over the past three decades, involving some of the biggest stars in the sport, including Ben Johnson and Marion Jones who were both stripped of Olympic golds. The two news organisations did not claim to have unearthed proof of doping. But they said they had obtained the secret test data from the vaults of the IAAF, supplied by a whistleblower disgusted by the extent of doping. This had indicated suspected widespread blood doping in athletics between 2001 and 2012, raising new questions about the sport just weeks before the Aug. 22-30 world championships in Beijing. The IAAF statement included a background summary on the complex process of how blood testing is conducted, and criticised the two Australian scientists who analysed the data and concluded it revealed an "extraordinary extent of cheating". "The experts have never worked for the IAAF and are therefore in no position to make any comment regarding what the IAAF has done or not done in the development and implementation of its blood and urine target testing program," the IAAF said. "To do so is simply guesswork on their part. The IAAF categorically refutes all allegations made by ARD and The Sunday Times and, specifically, that it failed in its duty to pursue an effective blood testing program at all times." The Sunday Times and ARD said they were given access to the doping results of over 12,000 tests from more than 5,000 athletes taken between 2001 and 2012. The two scientists concluded that more than 800 athletes had recorded one or more "abnormal" results, defined as a result that had less than one chance in 100 of being natural. They said the athletes, mostly endurance runners, accounted for 146 medals at the Olympics and world championships, including 55 golds. Russia accounted for the most, with 415 abnormal tests, followed distantly by Ukraine, Morocco, Spain, Kenya, Turkey and others, according to the reports. Vladimir Kazarin, the coach of two Russian athletes alleged to have submitted suspicious blood samples, said the accusations were unfounded. "If you have official positive doping tests, show us. If not, goodbye," he told Reuters in a telephone interview. Kazarin, who has coached the Russian women's athletics team since 2002, was the subject of an earlier ARD documentary on doping last year. He also dismissed the latest program. "This second film is unimaginable nonsense," he said. "It is simply ridiculous." Russia's anti-doping body promised to investigate the allegations, saying it would report back to the World Anti-Doping Agency (WADA), but nevertheless said the charges were either untrue or reflected the program makers' "incompetence". ZERO TOLERANCE WADA, a separate body set up in 1999 to coordinate doping investigations across global sport, said it was "very disturbed". The president of the International Olympic Committee, Thomas Bach, said the IOC would act with "zero tolerance" if there was any truth to the reports but stressed "at this time we've nothing more than allegations and we have to respect the presumption of innocence." In its detailed response, the IAAF rejected the claim that the results were secret, saying they had been published by WADA four years ago. However, it also said it condemned the publication of what it said was private and confidential data obtained without its consent. The athletics body addressed some of the specific accusations and said some athletes had later been found guilty and suspended because of investigations it had followed through on. However, it said a large proportion of these blood samples were collected before the implementation of the Athlete Biological Passport (ABP) so could not be used as proof of cheating. "While the anti-doping community as a whole has acknowledged that the tests currently available will not catch all cheats, the IAAF strongly refutes any notion that it has not used every possible tool to target suspected dopers." - REUTERS