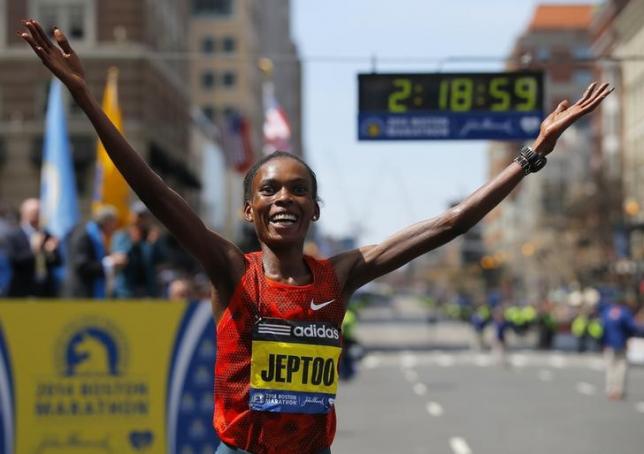 LONDON - Athletics' world governing body has asked the Court of Arbitration for Sport (CAS) to double the two-year doping ban handed out to Kenya's Boston and Chicago marathon winner Rita Jeptoo, CAS said on its website (www.tas-cas.org) on Tuesday. In the biggest drugs scandal to hit the East African country in recent years, Jeptoo failed an out-of-competition test in September for the blood-booster EPO although she denies doping and has appealed to CAS for the suspension to be lifted. CAS said the International Association of Athletics Federations (IAAF) had requested Jeptoo's "period of ineligibility be increased to four years, due to aggravating circumstances which it argues warrant an extended period of ineligibility". Jeptoo, 34, has asked sport's highest court for Athletics Kenya's (AK) decision to be set aside and for the two-year suspension to be lifted so she can "resume training and ... participate in IAAF competitions during the CAS proceedings". The world championships will be held Aug. 22-30 in Beijing. Jeptoo won back-to-back Boston and Chicago titles in 2013 and 2014 -- as well as Boston in 2006 -- to top the two-year World Marathon Majors series standings last year. However, AK has banned her from all competition until Oct. 29, 2016. Jeptoo's case has focused attention on Kenyan athletes who are among the world's best middle and long distance runners but have failed a number of drug tests, with the sports minister saying the rise in doping had "embarrassed" the country. At least 36 Kenyan athletes have failed dope tests in the past two years. Kenyan government officials have blamed the growing doping cases on foreign agents and AK’s failure to educate its athletes properly. - Reuters