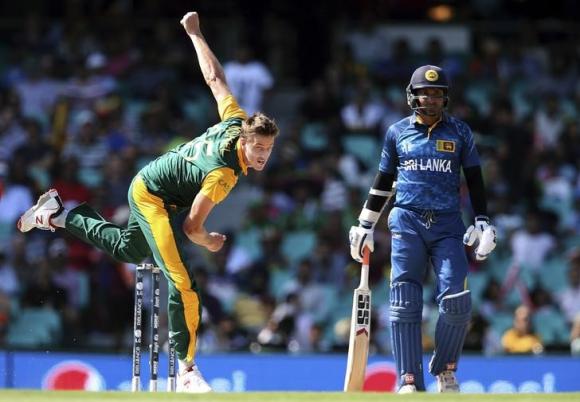 SYDNEY - The highlight reels at the World Cup have been running hot with batsman smashing balls all over cricket stadiums in Australia and New Zealand. Teams and individuals have been racking up record totals and the crowd have loved it, whooping and cheering every time another ball is dispatched into the stands. With the benefits of bigger bats and smaller boundaries, the world's best batsmen have been piling on the runs, hitting more than 450 sixes. In the previous 10 World Cups, no batsmen had ever made a double century and only once had a team cracked the magical 400-run barrier. But in 2015, two batsmen, Chris Gayle (215) and Martin Guptill (237 not out) have made double hundreds. And the 400-run barrier has been broken three times. But for the bowlers, the World Cup has been hard toil. Only one bowler, New Zealand paceman Trent Boult, has taken over 20 wickets in the tournament. At the 2007 World Cup, by comparison, four bowlers took over 20 wickets. The International Cricket Council (ICC) chief executive Dave Richardson said the sudden expansion of Twenty20, cricket's shortest and fastest-moving format, was clearly having a positive impact on other forms of the game. "I think the change in rules has helped, and the influence of T20 has impacted both ODIs and the way they play test cricket, so the batsmen are far more attacking," he said on Thursday. "That's led to the captains, probably out of desperation, having to be more attacking to take wickets to try and keep the scoring in check." But Richardson also admitted that the balance between bat and ball was shifting too much towards batsmen and the rules might have to be changed to give the bowlers more of a chance. He suggested that one possible rule change could be to allow teams to have five fielders in the outfield in last 10 overs, when batsmen typically score faster. Under the current rules, teams can only have a maximum of four fielders outside the circle. "In the old days you had one area you couldn't defend, now there's two and if a good batsmen is set as a bowler you've got very little prize (for the bowlers)," Richardson said. "One of the things we might look at is allowing an extra fielder out of the ring in the last 10 overs, remember we were worried about that middle period of the game that became boring where someone would score a run a ball 50 but no one remembering one shot. "We'll try and keep that and make sure we don't get back to that but maybe in the last 10 overs when people are not going to stop slogging or trying to hit boundaries just because one extra fielder is out. That might be a sensible change." - Reuters