Ice hockey - Canada grabs semi-final spot with win over US 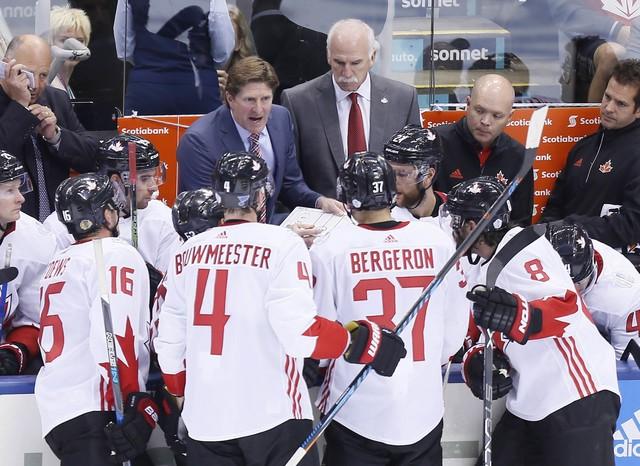 Ice hockey - Canada grabs semi-final spot with win over US

TORONTO - Canada ended US hopes of escaping the preliminary round of the World Cup of Hockey by thrashing their North American rivals 4-2, clinching a semi-final berth for the hosts and Team Europe. After an upset loss to Europe in their tournament opener, the United States (0-2) came into the showdown with Canada (2-0) needing a win to keep alive hope of advancing out of Group A, upping the intensity level in an already heated rivalry several notches. But after opening the scoring, the US surrendered four goals, including two in 14 seconds, dooming them to another early exit from a major international competition. "I thought we had a good start but gave them a couple of freebies and you just can't do that," said US coach John Tortorella, who will have one more meaningless game in group play against the Czech Republic. "It's disappointing, frustrating. I think we let some people down. It's on my watch and I certainly feel responsible." It was a day of rivalries at the World Cup as Finland and Sweden also faced off with the Tre Kronor claiming a 2-0 victory over the Finns behind the brilliant goaltending of Henrik Lundqvist, back in net after missing the opener with the flu. While Russia holds the status as traditional rival of both Canada and the United States, the bad blood fuelled by a Cold War and opposing political ideologies has long ago faded along with the much of the animosity. The new Canada-US rivalry has yet to produce a defining moment in a feud driven by a shared border and familiarity that has bred fierce contempt. Playing with desperation, the US got on the scoreboard first with Ryan McDonagh banging home a loose puck for a 1-0 lead but Canada hit back almost immediately with a pair of goals just 14 seconds apart from Matt Duchene and Corey Perry. Duchene collected his second of the period when he found himself alone in front of the American net, putting a nifty move on Jonathan Quick before slipping the puck between the US netminder's pads. Patrice Bergeron had the only goal of the second period as Canada improved their lead to 4-1, while T.J. Oshie closed out the scoring with a late goal for the Americans. "There were times tonight that I didn't think we were even close to being as good as we are capable of being," said hard to please coach Mike Babcock, who steered Canada to gold medals at the Vancouver and Sochi Olympics. "But now we're set up to play more games in the tournament, which is real positive. But we weren't as good as we were capable of being," he added. "Being Canadian, you're greedy." Lundqvist stopped all 36 shots he faced from a desperate Finland team as he emphatically ended any concerns about a possible injury as the Swedes seized control of Group B. The victory likely assured Sweden a spot in the semi-finals of the eight-team tournament and left Finland, who have not beaten their rivals in best-on-best competition since the 1998 Nagano Olympics, in a tough spot to reach the elimination stage. Anton Stralman collected the only goal the Swedes would need midway through the second period while Loui Eriksson added an insurance marker when he scored into an empty net. With the win, Sweden (2-0) lead Group B heading into their final game of the preliminary round against Team North America (1-1) on Wednesday. Finland (0-2) face long odds to reach the elimination round as they would need to beat Russia (1-1) on Thursday, have Sweden win and have the tie-breaking procedure go in their favour. -Reuters