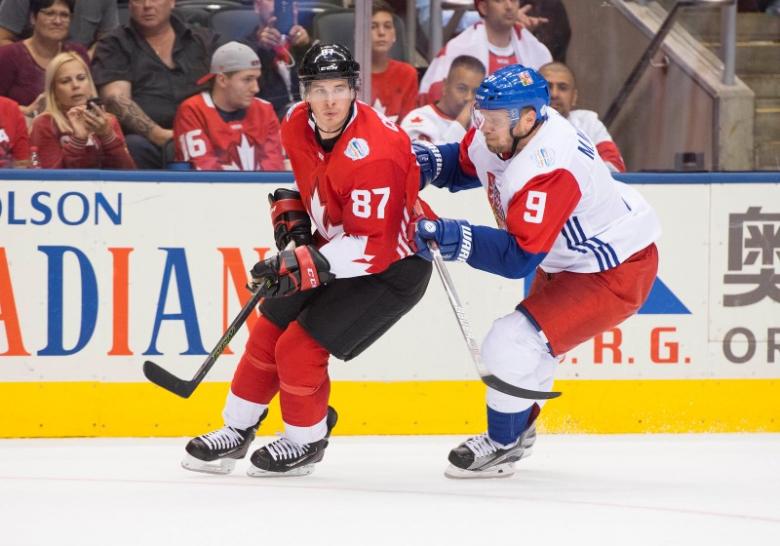 TORONTO - Sid may not be the Kid anymore but Sidney Crosby is still the man leading Canada to an opening game win at the World Cup of Hockey. The last time Crosby wore the Maple Leaf on home ice he scored the winning goal in overtime of the gold medal game at the 2010 Vancouver Olympics. The 29-year-old Canadian captain was back leading the charge again on Saturday scoring a goal along with two assists as Canada opened their World Cup of Hockey account with a 6-0 blowout win over the Czech Republic. "He (Crosby) was great," praised Canadian defenceman Brent Burns, who had an assist in the rout. "He's the best player in the world and he dominated tonight. "That line was great, they were buzzing, they were working and you have to do that to be the best in the world and I guess that's why he is." As always it was Crosby who set the tone when he broke in alone on the Czech goal soon after the opening faceoff. While Crosby would be denied by Michal Neuvirth that time he would still open the scoring near the midway mark of the first period when he took the puck from behind the net and cleverly flicked it in off the back of the Czech goalie to send the two-time defending Olympic champions on their way. "It was the only chance I had at it so it is never a bad play to throw it in there. Even if it doesn't go off him into the net, the puck is lying there with guys in front," said Crosby, who won his second Stanley Cup with the NHL's Pittsburgh Penguins three months ago. "It was nice to see it go in after missing that breakaway early. "It was nice to get the first one and build off that but I thought we played hard and we worked. "It didn't come easy we had to work for that and we got rewarded." With two Stanley Cups, two Olympic gold medals, two NHL most valuable player awards and a world championship gold, a World Cup title is one of very few honours not in Crosby's crowded trophy case. But it is not like a World Cup has eluded Crosby with the last World Cup staged a year before Pittsburgh made him the number one overall pick in 2005. -Reuters