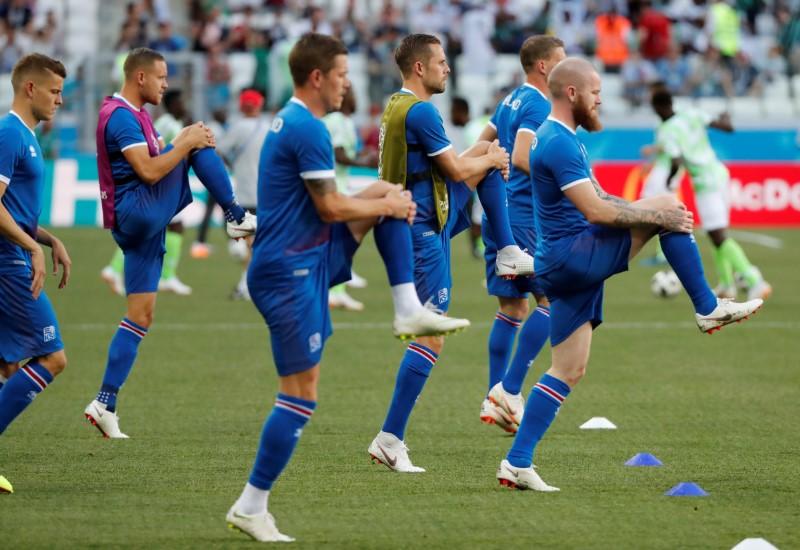 VOLGOGRAD, Russia (Reuters) - World Cup upstarts Iceland will need a new, attack-minded game-plan, and a lot more from their creative star Gylfi Sigurdsson, when they battle against the odds to keep their Russia 2018 dreams alive on Tuesday by beating in-form Croatia. Iceland’s attempts to contain Nigeria on Friday were shattered in the second half when they struggled to cope with the Africans’ pace and went down 2-0 in their Group D game. The World Cup debutants, who stunned twice champions Argentina last Saturday with a 1-1 draw, had gone into the interval feeling they were on track at 0-0, with Nigeria failing to register a single shot. A point would have kept Iceland in the second qualifying spot ahead of their final group match against Croatia. But Nigeria carved open Iceland after the break. Two well-taken goals by Ahmed Musa mean “Our Boys” must beat group leaders Croatia and hope the result of Argentina against Nigeria goes their way too. A win for Nigeria, and possibly even a draw depending on goal difference, would put the Africans in the knockout round and send Iceland, and their massive army of supporters, back to Reykjavik. Argentina would also be eliminated. Iceland coach Heimir Hallgrimsson said the soaring temperatures of Volgograd — which are likely to be a factor on Tuesday too in Rostov-on-Don — had sapped his players. He rued his team’s lack of bite, something he must address before Tuesday. “The tactics, the strategy was not wrong. We were perhaps a little unlike ourselves, a little toothless, but we didn’t have the wrong tactics,” he said. The loss before the game of injured winger Johann Berg Gudmundsson didn’t help. His pace is central to Iceland’s counter-attacking game. But even more rests on Sigurdsson, the most gifted Icelandic player of his generation. He recovered from injury just in time for the World Cup but has looked off the pace in Russia, despite his coach saying that was 100 percent fit. Against Nigeria, Sigurdsson had only two first-half shots, both in the opening minutes, and missed a penalty that cost Iceland their chance of getting back into the game with 10 minutes to go. Iceland must find a way to provide him with more support in attack, something that rests in large part on the chances of Gudmundsson recovering from injury, as they focus on Croatia. The Croats ended Iceland’s hopes of qualifying for the 2014 World Cup in a playoff and they will be seeking to ensure they finish top of the group, something they can do with a draw on Tuesday. “We only need to win (over) Croatia, but that might be easier said than done,” Hallgrimsson said.