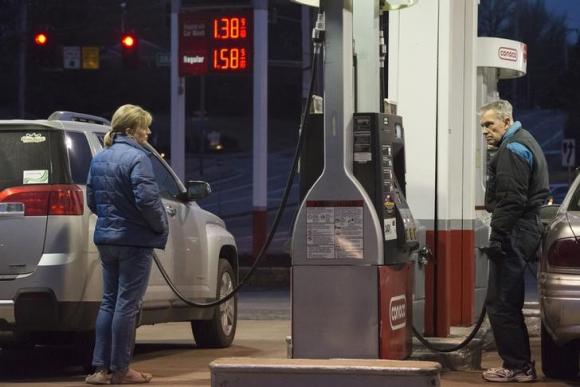 LONDON (Reuters) - Oil prices might have stabilized only temporarily because the global oil glut is worsening and US production shows no sign of slowing, the International Energy Agency said on Friday. The West's energy watchdog said the United States may soon run out of spare capacity to store crude, which would put additional downward pressure on prices. That process would last at least until the second half of 2015, when growth in US oil production is expected to start abating. Combined with an increase in global demand, the expected US production slowdown would give some support to oil prices and respite to oil producers' group OPEC, the IEA said. "On the face of it, the oil price appears to be stabilizing. What a precarious balance it is, however," the Paris-based IEA said in its monthly report. "Behind the façade of stability, the rebalancing triggered by the price collapse has yet to run its course, and it might be overly optimistic to expect it to proceed smoothly." The IEA said steep drops in the US rig count have been a key driver of the recent price rebound, which saw Brent crude rising to $60 per barrel after falling as low as $46 in January from last year's peaks of $115. "Yet US supply so far shows precious little sign of slowing down. Quite to the contrary, it continues to defy expectations," the IEA said. In February, non-OPEC production is estimated to have risen by about 270,000 barrels per day (bpd) on a month-on-month basis to 57.3 million bpd, led by higher output in North America. Global supply rose by 1.3 million bpd year-on-year to an estimated 94 million bpd in February, led by a 1.4-million-bpd gain for non-OPEC producers. US crude inventories soared due to output growth and plunging crude refinery throughput, with seasonal and unplanned refinery outages, weak margins and high gasoline stock builds. At last count, US crude stocks stood at a record 468 million barrels, the IEA said. "US stocks may soon test storage capacity limits. That would inevitably lead to renewed price weakness, which in turn could trigger the supply cuts that have so far remained elusive," the IEA said. "While the US supply response to lower prices might take longer to kick in than expected, it might also prove more abrupt," it said, adding that growth would abate in the second half of 2015. The IEA's conclusions will disappoint OPEC, which kept its output steady at the group's last meeting in November to protect market share and stifle US oil output growth. In the second quarter of 2015, when demand is at its weakest due to global refinery maintenance, the need for OPEC crude will be 28.5 million bpd, the IEA said - compared to the group's current output of 30.22 million bpd in February. TENTATIVE SIGNS OF RECOVERY The IEA raised its demand forecast for the second half of 2015, which in turn led to a higher call on OPEC crude of 30.3 million bpd in the same period - closer to the group's real production levels and the official target of 30 million bpd. Having bottomed in the second quarter of 2014, global oil demand growth has since steadily risen, with year-on-year gains estimated at 1.0 million bpd for the first quarter of 2015, the IEA said. The forecast of demand growth for 2015 as a whole has been raised by 75,000 bpd to 1.0 million bpd versus the last report and versus the 680,000 bpd growth seen in 2014, bringing global demand this year to an average of 93.5 million bpd. "Tentative signs of a demand recovery have emerged with the turn of the year, with a heavy emphasis reserved for the word ‘tentative’," the IEA said. In other bullish factors - beyond political instability in certain producing countries such as Iraq and Libya - refined product markets have proved unexpectedly strong, the IEA said. "Not only have product prices lagged those of crude during the selloff - as is common in a downturn - but they have raced ahead of them in the rebound, keeping refining margins remarkably firm, and supporting unexpectedly strong throughputs in once-depressed refining centers such as Europe and OECD Asia," the IEA said. "Product demand has shown signs of life, with even European demand emerging from a secular decline to show strong growth of 3.2 percent in December and 0.9 percent in January".