If we'd lost, I didn't know how I'd play cricket again: Buttler on fear before CWC19 final 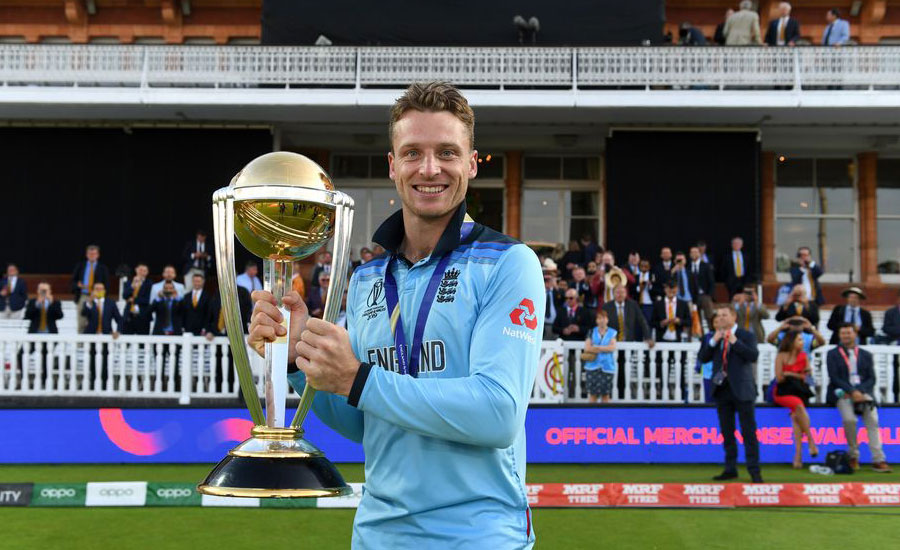 If we'd lost, I didn't know how I'd play cricket again: Buttler on fear before CWC19 final

LONDON (Reuters) - Jos Buttler, the England wicket-keeper batsman, revealed he was struggling with fear of failure before the ICC Men's Cricket World Cup 2019 final against New Zealand last week.
While England went on to win the tournament and lift their maiden men's World Cup, Buttler, who scored 59 runs and affected a match-winning run-out, needed counsel from team psychologist David Young before the game. "I had played in eight finals before Sunday and lost seven of them," Buttler told the Daily Mail. "I'd played in lots with Somerset, the Champions Trophy with England and when we lost the [World] T20 [final] in Kolkata. I knew how much it hurt watching the other team lift the trophy. I didn't want to feel that pain and that regret again."

From a group-stage exit in 2015, to world champions in 2019. It's been quite a journey.#CWC19Final | #WeAreEngland pic.twitter.com/V8VC8pXL9K

Since crashing out in the group stage of the 2015 World Cup, England underwent an ODI revolution with the sole aim of lifting the trophy at Lord's four years later. They rose to the top of the MRF Tyres ICC ODI Rankings and were one of the favourites to win the tournament. With the dream final before a home crowd turning into reality, Buttler found himself overawed by the historic occasion. "What was scaring me was if we lost, I didn't know how I'd play cricket again," he explained. "This was such a once-in-a-lifetime opportunity, a World Cup final at Lord's. It felt like destiny and I was thinking: 'If it doesn't happen, I will have no motivation to pick up a cricket bat for a very long time.' "When I was talking to David, I knew the answers. I knew all I could look after was the stuff I could look after, and I needed to get into my zone, which allows me to perform the best I can. But what happens if it goes wrong?" Buttler had similar worries in the group stage as well, when England had needed to win at least two of their last three games to ensure qualification into the knockouts. Defeats to Pakistan, Sri Lanka and Australia had put them in a difficult position.

"Before the India game, I was struggling with coming to terms with the prospect of us getting knocked out. We'd been favourites, so highly fancied by everyone, and there was the danger that four years of playing such good cricket was going to come to nothing," he said.

"Think about what people will say about us as a team, think about how they will call us chokers, everything else they will say. I remember seeing a comment — maybe it was the one that got Jonny Bairstow wound up — about how it would be the biggest failure because of how much had gone into this World Cup. I was struggling with the thought of that." Despite the magnitude of the occasion, England – and Buttler – stuck to the basics, keeping their cool in the crunch moments of the game. The wicket-keeper caught Martin Guptill short of his crease off the final delivery of the Super Over to script one of the most memorable moments in the history of the sport. "I knew the moment I broke the wicket, that was it," Buttler added. "Both gloves went [off], I threw my hat in the air. I was running around and Moeen Ali was aeroplaning past me and Jofra [Archer] was on the floor miles away. Those feelings justify everything. That moment lasts for 20 seconds, maybe, and it is just the best time of your cricket career. "I didn't cry after the game. I thought I would, but it wasn't until the next day. I watched the highlights and I was overwhelmed with what we had achieved. It justifies everything you have worked for, all the sacrifice, the sacrifice of family and friends, every gym session, every net session you didn't want to do. It justifies everything," he went on. "I'm 28 and for however long I have left in my career, I would just enjoy it and think: 'That happened'."