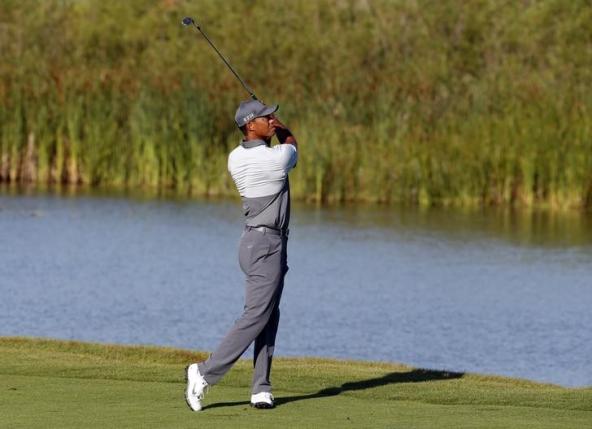 Wisconsin -  Tiger Woods, still striving to find consistency with his game, is in unusual territory as he heads into this week's PGA Championship with his PGA Tour season all but over and his world ranking in freefall. "I'm just trying to get better," Woods, a four-times winner of the PGA Championship, told reporters on a sun-splashed Tuesday at Whistling Straits where he was preparing for Thursday's opening round in the year's final major. The greatest player of his generation has plummeted to a mind-boggling 278th in the global pecking order, and looks almost certain to miss the four season-ending FedExCup playoff events because of his poor form. Still working through the latest swing change of his career after recovering from back surgery, Woods has endured a dismal 2015 campaign featuring three missed cuts, a withdrawal and just two top-25 finishes in nine starts. "I'm just trying to get up there where I can win tournaments, get my game organized so I can be consistent on a tournament basis, where I'm going to give myself a chance to win each and every event I play in," said Woods. Asked to pinpoint what was holding his game back, Woods replied: "Just being consistent on a daily level. I just need to be a little bit better from shot to shot." Woods posted his worst round as a professional, an 85 at the Memorial tournament in June, and he has since missed the cut at both the U.S. Open and British Open -- the first time in his career he has done so at consecutive major championships. Wayward driving for most of this season and a shockingly bad short game earlier this year sparked widespread advice from all corners - media pundits, swing coaches and both former and current players all weighing in. Woods, however, said he had never listened to unsolicited advice about his game at any point during a stellar career that has produced 79 PGA Tour victories, including 14 major titles. "I've relied on friends and family and people that I trust and are close to me," he explained. "As far as anything outside of that, they speak from a perspective that may not be mine, what I'm going through. "They can only describe from their own experiences, and not everyone has gone through what I've had to go through," said Woods, who would qualify for the FedExCup playoffs with no worse than outright second place at the PGA Championship. Failing that, he would have just next week's Wyndham Championship in Greensboro, North Carolina - should he choose to compete in the PGA Tour's final regular season event - to advance his cause. - REUTERS