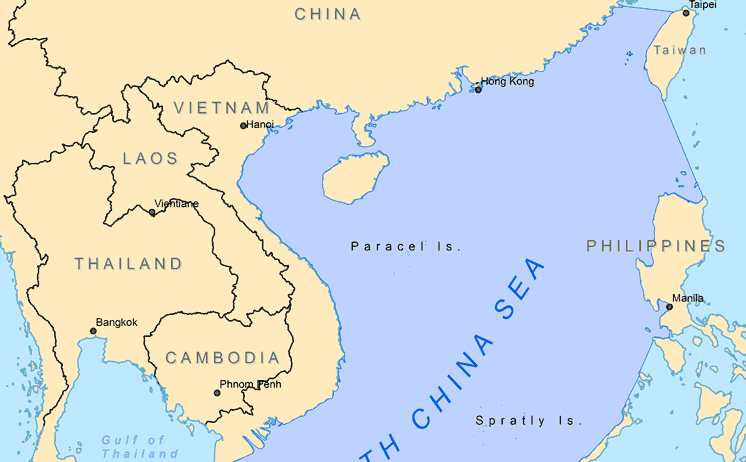 WASHINGTON - Recent satellite images published on Thursday show China has made rapid progress in building an airstrip suitable for military use in contested territory in the SouthChina Sea's Spratly Islands and may be planning another, moves that have been greeted with concern in the United States and Asia. IHS Jane's Defense Weekly said March 23 images from Airbus Defence and Space showed work on the runway on reclaimed parts of Fiery Cross Reef in the Spratly archipelago, which China contests with the Philippines, Vietnam, Malaysia, Brunei and Taiwan. It said images from earlier in March showed reclamation work on Subu Reef in the Spratlys creating landmasses that, if joined together, could create space for another 3,000-meter (3,281-yard) airstrip. The report said other images suggested China was working to extend another airstrip to that length in the Paracel Islands further north in the potentially energy-rich South ChinaSea, a vital shipping route through which $5 trillion of trade passes every year. The report comes a day after the US military commander for Asia, Admiral Samuel Locklear, said China, which claims most of the South China Sea, could eventually deploy radar and missile systems on outposts it is building that could be used to enforce an exclusion zone should it move to declare one. Senator John McCain, chairman of the US Senate Armed Services Committee, called the Chinese moves "aggressive" and said they showed the need for the Obama administration to act on plans to move more military resources into the economically important Asian region and boost cooperation with Asian countries worried by China. McCain referred to a US intelligence assessment from February that China's military modernization was designed to counteract US strength and said Washington had a lot of work ahead to maintain its military advantage in the Asia-Pacific. "When any nation fills in 600 acres of land and builds runways and most likely is putting in other kinds of military capabilities in what is international waters, it is clearly a threat to where the world's economy is going, has gone, and will remain for the foreseeable future," he told a public briefing in Congress. US WARNS AGAINST MILITARIZATION A spokesperson for the US State Department said the scale of China’s land reclamation and construction was fueling concerns within the region that China intends to militarize its outposts and stressed the importance of freedom of navigation. "The United States has a strong interest in preservation of peace and security in the SouthChina Sea. We do not believe that large-scale land reclamation with the intent to militarize outposts on disputed land features is consistent with the region’s desire for peace and stability." The issue was discussed in a meeting in Washington between US Deputy Secretary of State Antony Blinken and his Japanese and South Korean counterparts. Japan's Vice Foreign Minister Akitaka Saiki told reporters afterwards that China had a duty to address regional concerns, while his Korean counterpart, Cho Tae-yong, stressed the importance of stability in the South China Sea for trading nations like his. The United States warned last week against militarization of contested territory in Asia, and President Barack Obama accused China of using its "sheer size and muscle" to push around smaller nations, after Beijing sketched out plans to use the Spratlys for military defense as well as to provide civilian services that would benefit other countries. IHS Jane's said images of Fiery Cross Reef showed a paved section of runway 505 meters (552 yards) by 53 meters (58 yards) on the northeastern side of the reef, which Chinabegan turning into an island with extensive dredging last year. IHS Jane's said its photos showed further dredging work on the southwestern side of the island and floating cranes consolidating a harbor. Washington's Center for Strategic and International Studies think tank said satellite photographs from April 11 showed the runway about one-third complete, with a projected total length at 3,110 meters (3,401 yards), large enough for heavy military transport planes and fighters. CSIS said the reclamation work could help China press its territorial claims, many of which are more than 1,000 miles (1,600 km) from its shores, by allowing it to sustain long-distance sea and air patrols. However, its artificial islands were too small and vulnerable, both to weather and wartime targeting, to support major forward deployment of military forces, it said. CHINA DEFENDS ITS MOVES At a seminar in Washington on Thursday, China's ambassador to the United States, Cui Tiankai, said it was "natural" that its reclamation work would include military defense facilities. He said there "should be no illusion that anyone could impose on China a unilateral status quo" or "repeatedly violate China's sovereignty without consequences." In an apparent reference to US air activity, Cui added that the U.N. Convention on Law of the Sea, to which the United States is not a signatory, did not give anyone the right to "conduct intensive and close-range reconnaissance in other countries' exclusive economic zone."