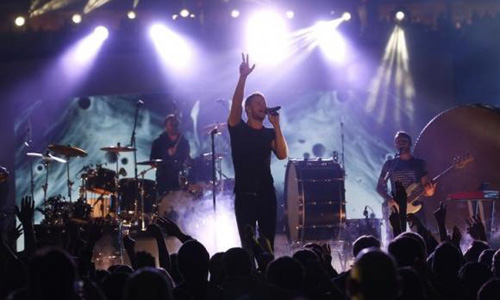 LOS ANGELES (Reuters) - Alt-rockers Imagine Dragons knocked rapper Drake from the top spot of the weekly U.S. Billboard 200 album chart on Wednesday, after a strategically placed commercial with retail store Target during the Grammy Awards drove up exposure. "Smoke + Mirrors," the sophomore album from the Las Vegas band, sold 172,000 copies and 172,000 songs, and was streamed 7.6 million times, bringing its total unit tally to 195,000, according to figures from Nielsen SoundScan. The Billboard 200 chart tallies album sales, song sales (10 songs equal one album) and streaming activity (1,500 streams equal one album). Sales of "Smoke + Mirrors" were aided by a Target commercial featuring a live performance by Imagine Dragons during the Feb. 8 CBS telecast of the Grammy Awards, music's top accolades. Nielsen Music said the band's commercial reached 10.5 million in the 18-49 demographic that advertisers covet. Drake's "If You're Reading This, It's Too Late" dropped to No. 2 this week with a unit tally of 187,000, while the "Fifty Shades of Grey" soundtrack, which features Beyonce and Ellie Goulding, dropped one spot to No. 3 with 165,000 units. Imagine Dragons was the only new entry in the top 10 of this week's album chart. On the digital songs chart, which measures online download sales, Mark Ronson and Bruno Mars' throwback upbeat "Uptown Funk!" climbed back to No. 1 with 257,000 downloads after being knocked off last week by Ed Sheeran's "Thinking Out Loud."