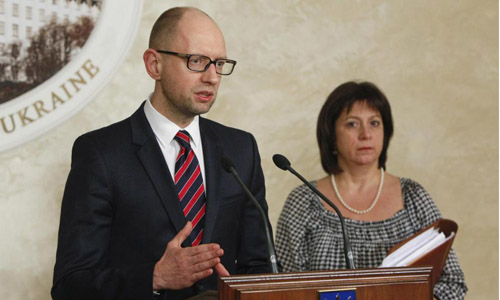 WASHINGTON - The International Monetary Fund has agreed to pump $10 billion into Ukraine's troubled economy over the next year, providing swift assistance for the country's struggling finances as part of a larger four-year bailout. The IMF board on Wednesday approved a loan of $17.5 billion, with the bulk of the money heading out the door fast: $5 billion likely by the end of this week and another $5 billion in coming months, IMF officials said. That will be combined with $7.5 billion in loans from other international organizations and an expected $15.4 billion in debt relief that Ukrainian officials hope to negotiate with bondholders. The program "is very strongly front-loaded during the first year," IMF Managing Director Christine Lagarde said in Berlin. "Ukraine has satisfied all the prior actions that were expected and required of it in order to start running the program. ... We are off to a good start." The program aims to provide what Lagarde called "immediate economic stabilization" to a country beset by conflict with Russia and uncertainty about its territorial integrity. Prime Minister Arseny Yatseniuk said the IMF program's impact should be felt quickly in a country struggling with balance-of-payments problems and a crashing currency. The program "will enable us to stabilize the economy and the financial sector. It will be used to stabilize the currency. It will enable the Ukrainian economy to grow from 2016," Yatseniuk said in a televised statement. White House spokesman Josh Earnest welcomed the IMF's action, adding: "The United States is working alongside international partners to provide Ukraine with the financial support it needs as it continues to take steps that will transform the Ukrainian economy and strengthen its democracy." After a year of political upheaval and war, Ukraine's economy is in a tailspin with a currency just back from record lows, the highest interest rates in 15 years, and central bank reserves of just $6.4 billion, barely enough to cover five weeks of imports. The IMF said the economy should grow 2 percent in 2016 after a contraction of about 5.5 percent this year, and by end-2015, Kiev should have enough reserves to cover about three months of imports. The IMF last year approved a $17 billion, two-year loan to Ukraine, but deemed the effort insufficient to support economic reform while the government continued battling pro-Russia separatists in eastern Ukraine following Russia's annexation of the Crimea region. – Reuters