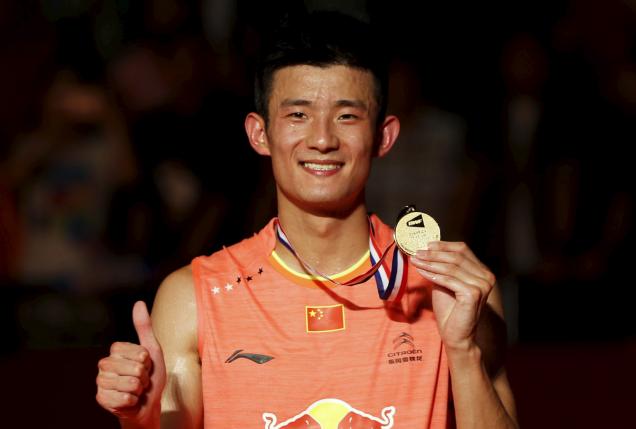 JAKARTA - China's Chen Long produced a fitting display for a top seed and defending champion to claim a second straight world title with a pulsating 21-14 21-17 victory against Malaysian nearly-man Lee Chong Wei on Sunday. Lee has topped the world rankings for a record 298 weeks during a long and illustrious career but once again came up short against a Chinese player at the top of his game in a fourth world championship final defeat in as many matches. Chen has replaced Lin Dan as the top male player following his breakthrough world title triumph a year ago and the rangy 26-year-old has also replaced his compatriot as Lee's arch nemesis after repeating last year's win over the Malaysian. Lin has beaten Lee in four major finals, including the last two Olympics, but Chen has emerged from the shadow of a player many believe to be the greatest ever with a complete game built on his supreme agility, speed, power and fitness. At 1.87 metres, Chen also boasts a court-covering reach and used all of his attributes to rein in the fast-starting Lee, realising he was dominating when he attacked and coming off second best in the tactical rallies. Once he took the lead at 11-10, Chen looked unstoppable and reeled off 16-of-20 points to claim the opening game before storming out of the blocks in the second to forge a six-point lead by the interval. Lee battled gamely as Chen's intensity levels dropped but the Malaysian was unable to get any closer than within two points of his opponent in the second game as a packed Istora Senayan roared in approval. "Lee is a good player but I was better today," Chen said in a courtside interview. "This is a very special arena, so it feels great to win the world title here." MARIN DEFENDS Carolina Marin also enjoyed a successful title defence, the top-seeded Spaniard beating Saina Nehwal 21-16 21-19 in a high-class encounter to deny India a first world badminton title. The world number one had been under an injury cloud in the build up to the championships but twice relied on her ability to quickly string together points at crucial times to rally from behind in both games and secure victory in 56 minutes. "I didn't think I would be here when I was struggling with my injuries but my coaches said I should keep training and try to play at the world championships and just do the best I could in the tournament," Marin said. "I knew from the beginning it was going to be a very tough match because Saina is really good but I kept fighting until the end and am very happy with my performance today." Earlier, top seeds Zhang Nan and Zhao Yunlei stormed to a third mixed doubles world title with a comfortable 21-17 21-11 victory over compatriots and former junior world champions Liu Cheng and Bao Yixin. Zhao returned to the court a few hours later to successfully defend another title when the 28-year-old partnered Tian Qing to a 23-25 21-8 21-15 win over Denmark's Christinna Pedersen and Kamilla Rytter Juhl as they retained the women's doubles crown. The home fans were then rewarded for their patience as Indonesia's Mohammad Ahsan and Hendra Setiawan regained the men's doubles title they won in 2013 with a 21-17 21-14 victory over China's Liu Xiaolong and Qiu Zihan in the last match of the day. -Reuters