ISLAMABAD: Pakistan Tehreek-e-Insaf’s (PTI) chairman Imran Khan has on Friday said that his party representatives would not attend any televisions chat shows where Pakistan Muslim League-Nawaz’s (PML-N) MNA Javed Latif is invited. In his message on social media website, he said that no party members & leaders will attend any public forum event where Jawed Latif is invited. 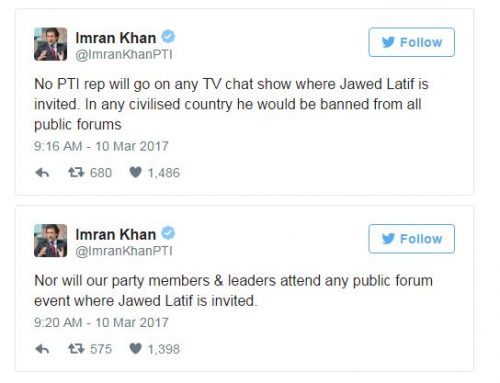 Earlier, the ruling Pakistan Muslim League-Nawaz (PML-N) and Pakistan Tehreek-e-Insaf (PTI) lawmakers had brawled in Parliament after a leader of the ruling party called cricketer-turned-politician Imran Khan a “traitor’. PML-N lawmaker Mian Javed Latif, during a debate in the National Assembly had said that Pakistan Tehreek-e-Insaf chairman Imran Khan’s attitude towards recently-concluded cricket tournament Pakistan Super League (PSL) was that of a “traitor”, as he opposed the final in Lahore and ridiculed foreign players. As Latif was moving out of Parliament, he entered into a heated argument with PTI’s Murad Saeed, leading to a scuffle between the two lawmakers. However, other lawmakers intervened and saved the situation from getting out of control.