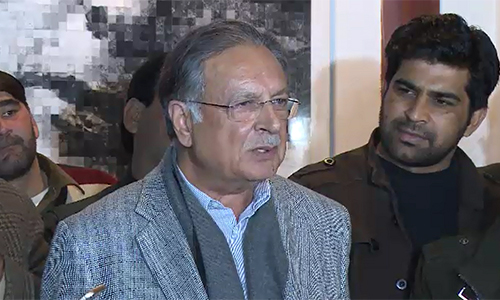 ISLAMABAD (92 News) – Federal Minister for Information and Broadcasting Pervaiz Rashid said that Imran Khan has cut off the hands of accountability in Khyber Pakhtunkhwa.

Taking to the media after addressing a ceremony on Saturday, he said: “Perhaps mega corruption has been committed in the province and its link extends to Bani Gala. If it is not so, Imran Khan should show courage and give an opportunity to Lt-Gen (retd) Hamid Khan.”

The minister said that after taking U-turns on hereditary politics and Essential Services Act, Imran Khan had also taken U-turn on accountability. “Former DG Ehtisab Commission General Hamid has issued a statement regarding corruption amounting to billions of rupees,” he added.

Pervaiz Rashid said that former prime ministers were appearing before the NAB, but Imran Khan cut off the hands of accountability in Khyber Pakhtunkhwa.

He said that there was no International Daesh in Pakistan, but local terrorists were using the name of Daesh. “Action will be taken against terrorists across the country, including Punjab,” he added.