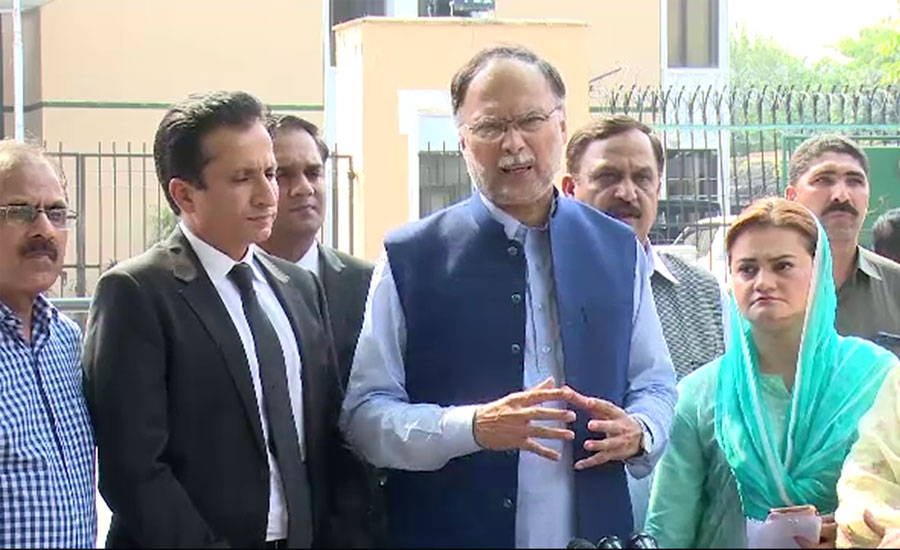 LAHORE (92 News) – PML-N leader Ahsan Iqbal has said that Prime Minister Imran Khan destroyed the economy and fulfilled the foreign agenda by paralyzing China Pakistan Economic Corridor (CPEC). Talking to the media with Marriyum Aurangzeb outside the ECP Office on Thursday, he said that he wants to seek attention of the nation towards money laundering. “The PTI is fleeing from the probe into party funding. Imran Khan is trying to hide himself behind legal matters to avoid the law,” he said. The PML-N leader said that Imran Khan had been using a hospital for his political objectives. “The PTI had not mentioned its 18 accounts. The SBP told the ECP that huge amounts were transferred into these accounts,” he said. Ahsan Iqbal said that Imran Khan used to maintain his and party expenditures through these funds. “We have also requested the NAB chairman to look into the matter,” he said. On the other hand, the family members, including Shehbaz Sharif, met Nawaz Sharif in jail. According to party sources, Nawaz Sharif directed AJK PM Raja Farooq Haider and the PML-N leaders to work for the rehabilitation of the earthquake victims. He asked the AJK PM to visit the houses of the quake victims. “The earthquake is a natural calamity and we will not leave the people alone. I have sympathies with the Kashmiris even in jail,” he said. Nawaz Sharif asked Shehbaz Sharif to seek suggestion during a meeting of the PML-N CEC on September 30. “The final decision about whether to participate or not in the Azadi March to be launched by Maulana Fazlur Rahman,” he said. The PML-N CEC will meet in Model Town on September 30.