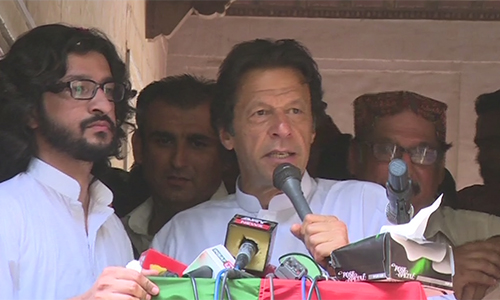 ROJHAN (92 News) – PTI chairman Imran Khan has said that the Sharif brothers have spent Rs 1.5 billion on the Metro Bus, but they did not build dykes to deal with the floods. Addressing flood affectees in Rojhan on Monday, he said that the country is sinking, but the government’s attention is restricted to the Metro. He said that the floods have caused losses to farmers and time has come to stand for the farmers. “The Sharif brothers are not bothered about the areas that are away from Lahore,” he said. Later, he left for the flood-hit areas in Dera Ghazi Khan and Layyah. About the provocative speeches of Altaf Hussain, he said that had such provocation been committed in India his party would have been banned within an hour. He said that he would not spare the Election Commission over rigging in the elections.