ISLAMABAD (92 News) – Cricket legend turned politician and Pakistan Tehreek-e-Insaf (PTI) chairman Imran Khan has tied the knot for the third time by marrying a faith healer, his party announced on Monday. The couple ended rumors that had been swirling for months about Khan considering a third marriage, after having been divorced twice. Fawad Hussain, the spokesman for s Pakistan Tehreek-e-Insaf, said that the 66-year-old cricket star married Bushra Bibi, a divorcee, his friends say he sought out in the past for spiritual healing. Khan's party released photographs of him smiling, sitting with his new wife and her relatives. Rumors about Khan's third marriage started circulating in January. Khan was previously married to socialite Jemima Goldsmith and journalist Reham Khan. Bushra comes from a politically influential family from eastern Punjab province. On the other hand, the Waleema ceremony will be held at Bani Gala in next few days. 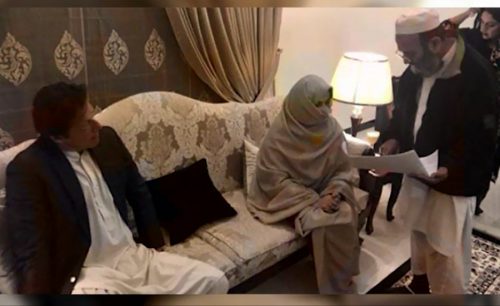