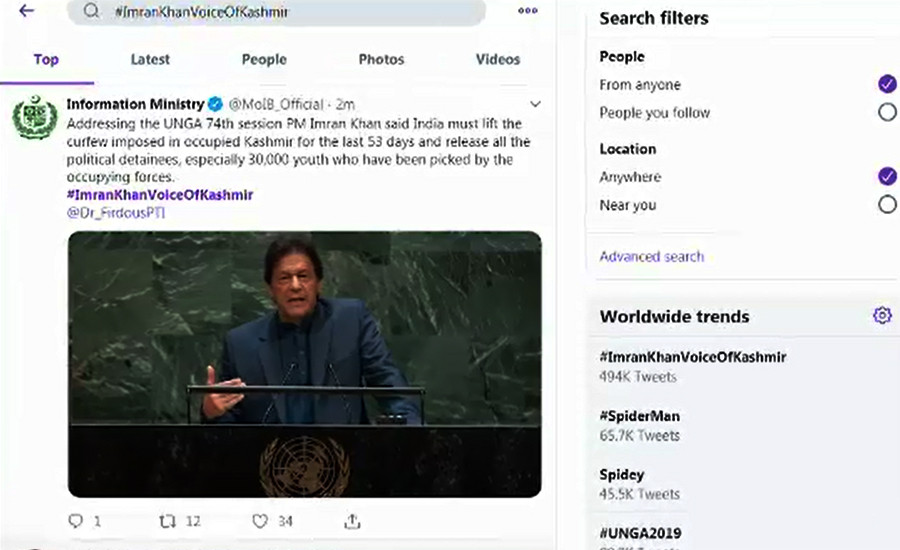 ISLAMABAD (92 News) – Prime Minister Imran Khan received worldwide acclaim on Twitter following his speech at the UN General Assembly in New York on Friday. Addressing the 74th General Assembly, Prime Minister Imran Khan highlighted several important issues, with Kashmir at the top. He also discussed Islamophobia, money laundering and climate change. During his 50-minute historic address which continued to receive ovation, the prime minister said that India did terrorism in Balochistan. “Indian spy Kalbhushan Jadhav confessed to terrorism in Pakistan. India attacked Pakistan on the pretext of Pulwama,” he said. The prime minister said that the international community should help the Kashmiris get their right to self-determination before it is too late. “The United Nations should resolve the Kashmir issue.” PM Imran Khan said that that Islamophobia is dividing the world. “An increase in Islamophobia is alarming. In some countries, the wearing of ‘Hijab’ has been made difficult. ‘Hijab’ is not a weapon. Islamophobia started after 9/11. The western leaders linked Islam to terrorism,” he said. Imran Khan told the UNGA that billions of dollars are transferred to the rich countries from the poor countries each year. “The elite is looting the poor countries. Money is transferred to the rich countries through fake and so-called companies. The assets of the poor countries are transferred to the rich countries through offshore companies,” he maintained. He asked the rich countries to help the poor countries in controlling money laundering. His speech was welcomed both domestically and internationally. Twitter users shared excerpts from his speech under the hashtag #ImranKhanVoiceOfKashmir. Reacting to the speech, Mashal Malik, wife of incarcerated Hurriyat leader Yasin Malik, said that Prime Minister Imran Khan had shown the true face of India to the world. “The PM presented the case of Kashmiris in a better way. India has made Kashmir a big torture cell,” she said. Mashal Malik said that the PM told the UN that the matter would lead to a nuclear war if it did not play its role.