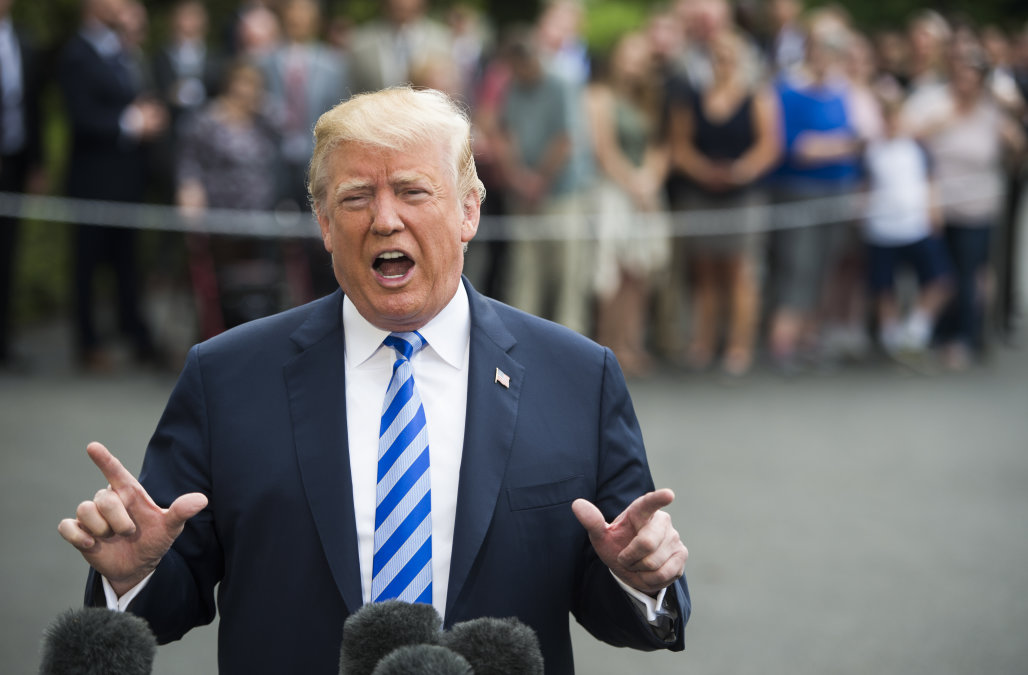 WASHINGTON (Reuters) - President Donald Trump, in a complete reversal, said he will hold a summit with North Korean leader Kim Jong Un on June 12 in Singapore in the latest twist in the high-stakes diplomacy over eliminating Pyonyang’s nuclear arms programme. Eight days after cancelling the unprecedented summit, citing Pyongyang’s “open hostility,” Trump welcomed North Korea’s former intelligence chief - currently under punitive US sanctions - to the White House Oval Office, afterward exchanging smiles and handshakes, patting his arm in a friendly gesture. “Good meeting today. I think it’s a great start,” Trump said after conferring for about 90 minutes with Kim Yong Chol, who became the first North Korean official to visit the White House in 18 years and who the US president called “the second most powerful man in North Korea.” Trump said he expected an eventual “very positive result” with North Korea but dampened expectations for a breakthrough in Singapore. “We’re not going to go in and sign something on June 12th, and we never were,” Trump told reporters on the White House lawn. “We’re going to start a process. And I told them today, ‘Take your time, we can go fast, we can go slowly,’ but I think they’d like to see something happen.” Trump said it could take several meetings to reach an agreement, but he was convinced Kim Jong Un is committed to denuclearization. “He’d like to see it happen,” Trump said. It was an extraordinary change in tone from a president who last year threatened to rain “fire and fury like the world has never seen” on North Korea because of the threat its nuclear weapons and missiles posed to the United States. Trump even backed away from the words “maximum pressure” that his administration had used to describe its approach to North Korea, combining the toughest-ever US and international economic sanctions with diplomatic actions and the Republican president’s military threats and preparations.

“We’re getting along, so it’s not a question of maximum pressure,” Trump said. “At some point, hopefully ... for the good of millions of people, a deal will be worked out.” Trump said one thing that could come out of the summit is an agreement formally ending the 1950-53 Korean War, which was concluded only with a truce, not a peace treaty. “We are going to discuss it prior to the meeting. That’s something that could come out of the meeting,” Trump said when asked if a document ending the war was bring prepared. The visiting North Korean official, linked by US intelligence to a high-profile cyber attack on Sony Pictures in 2014, delivered a letter from Kim Jong Un to Trump. A White House official said Trump had read the letter but did not reveal its contents. Trump wants North Korea to “denuclearize,” meaning to get rid of its nuclear arsenal, in return for relief from economic sanctions. But North Korea’s leadership is believed to regard nuclear weapons as crucial to its survival and has rejected unilaterally disarming. A senior member of Trump’s Republican Party sounded a note of caution. Speaking in Kentucky, Senate Majority Leader Mitch McConnell said he expected the North Koreans to make “every effort they can to get sanctions and other relief and give up as little as possible.” “For these situations to work, you have to not want the deal too much,” McConnell said. “You fall in love with the deal and it’s too important (to) you to get it, and the details become less significant, you could get snookered,” McConnell said. North Korea, whose nuclear ambitions have been a source of tension for decades, has made advances in missile technology in recent years but Trump has sworn not to allow it to develop nuclear missiles that could hit the United States. Wall Street took news of the summit’s revival in stride. While Trump sounded conciliatory towards North Korea, Kim used Cold War-style language about Washington during a televised encounter with Russian Foreign Minister Sergei Lavrov in Pyongyang , referring to “US hegemonism.” Referring to the Lavrov meeting, Trump said he “didn’t like it.”

Trump abruptly called off the summit on May 24 after North Korea sharply criticized US Vice President Mike Pence and Trump’s national security adviser, John Bolton. “I think we’re over that, totally over that,” Trump said . While Trump has put great importance on sealing a nuclear deal with North Korea, and secured the return of three Americans detained there, he has bucked traditional US foreign policy and alienated America’s European and NATO allies and trading partners. He snubbed France, Germany and Britain by pulling out of a nuclear agreement with Iran and upset the Europeans, as well as neighbours Canada and Mexico, with protectionist trade policies. The North Korean envoy, Kim Yong Chol, was the highest-level figure from the reclusive country to hold talks at the White House since a senior envoy visited former President Bill Clinton in 2000. He is vice chairman of the ruling Workers’ Party’s Central Committee. Trump walked the envoy out of the Oval Office to the lawn, posing for photographs as his beaming secretary of state, Mike Pompeo, looked on. Trump said North Korea’s human rights record was not discussed at the meeting. Kim Yong Chol once served as a bodyguard to the current leader’s father, Kim Jong Il, and was previously chief of the Reconnaissance General Bureau, a top North Korean military intelligence agency. In 2015, then-US director of national intelligence James Clapper described Kim Yong Chol as “the guy who ultimately would have to okay the cyber attack against Sony” in 2014. North Korean hackers allegedly infiltrated Sony’s systems and destroyed computers and laptops, apparently in retaliation for the entertainment company’s comedy movie “The Interview” that parodied North Korea’s leadership. Kim Yong Chol has featured on lists of North Korean officials targeted by US Treasury sanctions, including for supporting his country’s nuclear and missiles programs and proliferation of weapons of mass destruction and the cyber attack. He was granted special permission to travel to the United States for meetings this week with top US officials, the State Department said. He was accused by South Korea of masterminding deadly attacks on a South Korean navy ship and an island in 2010. North Korea denied any involvement in either incident.