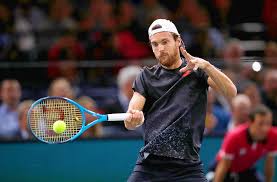 (Reuters) - Novak Djokovic’s pursuit of the season-ending world number one spot continued with a 7-5 6-1 victory over Portuguese qualifier Joao Sousa in the second round of the Paris Masters on Tuesday.
World number two Djokovic, who received a first-round bye, broke his opponent’s serve four times to extend his winning run to 19 matches. The 31-year-old Serb has returned to his brutal best this season with Grand Slam wins at Wimbledon and the U.S Open, along with ATP Masters triumphs in Cincinnati and Shanghai. For Djokovic to surpass top-ranked Rafa Nadal when the next edition of the ATP rankings are released on Monday, he must outlast the Spaniard in the French capital this week. If both players lose in the same round, Nadal will retain the world number one ranking heading into the season-ending ATP Finals in London next month. Canada’s Milos Raonic came from a set down to reach the second round with a hard-fought 6-7(4) 7-6(5) 7-6(5) win over local favourite Jo-Wilfried Tsonga. In a meeting of former finalists, Raonic fired 23 aces and won 89 percent of first-serve points to beat Tsonga in just under three hours. The 27-year-old Raonic will next face Roger Federer, who is chasing his 100th career title after winning the Swiss Indoors last week. Fernando Verdasco, who reached the quarter-finals last year, produced a clinical display to defeat Frenchman Jeremy Chardy 6-4 6-4. The 34-year-old Spaniard will meet compatriot Nadal in the second round on Wednesday.