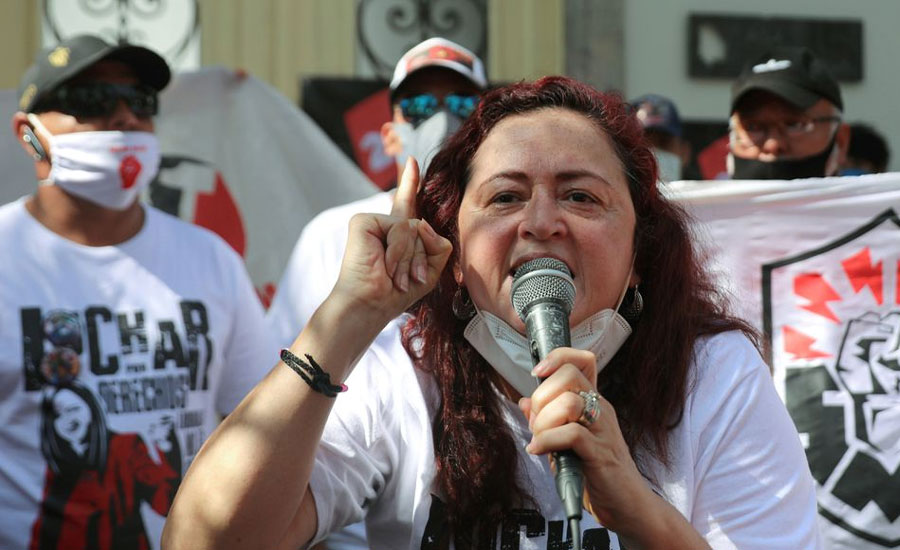 (Reuters) - After successfully staging a wildcat strike for higher wages in 2019, many workers at the Tridonex auto-parts plant in the Mexican city of Matamoros, across the border from Texas, set their sights higher: replacing the union that they say failed to fight for them.

Six workers at the factory, which refits second-hand car parts for sale in the United States and Canada, told Reuters they felt let down that their union, SITPME, did not back their demands for better pay. About 400 Tridonex workers protested outside a Matamoros labor court last year to be allowed to switch unions.

The Tridonex workers and thousands more at other Matamoros factories walked off the job demanding a 20% raise and 32,000-peso bonus, many without union backing. In nearly all cases, the companies conceded.

"This showed us what we were capable of," said Edgar Salazar, then a Tridonex employee. "We know we have rights, but the union just wants to cash in. It doesn't support us at all."

However, Salazar and many of his Tridonex colleagues wanted to throw their support behind a new organization led by activist and attorney Susana Prieto.

But their efforts are failing, labor experts acknowledge.

Dismantling the power of Mexico's entrenched unions is proving a tough challenge, some labor activists say, with few signs that reforms promised under a new North American trade deal are yet charting an easier course.

Amid resistance from SITPME, the Tridonex workers' request to be represented by Prieto's union has still not been put to a vote. Legal challenges by attorney Prieto to replace unions at 45 other factories in the area have also stalled.

When Prieto urged strikes in January to again demand higher pay, just a few hundred people protested across a handful of companies. "They're scared, because they don't have anyone to defend them," Prieto said. According to Prieto, about 600 of her supporters at Tridonex -- including Salazar -- were fired between April and October 2020. Reuters could not independently confirm this.

Cardone Industries, Tridonex's Philadelphia-based parent, did not respond to a question about allegations of retaliation.

It says layoffs were made due to reduced demand following pandemic lockdowns but did not provide further details. Cardone is controlled by Canadian company Brookfield Asset Management.

Leftist President Manuel Andres Lopez Obrador passed a law in 2019 guaranteeing workers the right to independent unions. Though strong on paper, it does not come fully into effect until 2023.

"The law in general is very good. But that doesn't mean we're going to get any change in Mexico anytime soon," said Kimberly Nolan, a labor scholar at the Latin American Faculty of Social Sciences research institute.

Some of the Matamoros workers are now looking to the United States for backing.

With Democrat Joe Biden now president, Mexico may come under close scrutiny to uphold the USMCA's pro-worker provisions, which were partly designed to prevent low labor costs from leeching more U.S. jobs. Under the treaty, companies failing to ensure freedom of association for workers in Mexico could be sanctioned with tariffs and other penalties.

The Office of the U.S. Trade Representative, which runs U.S. trade policy, did not respond to a question of how the Biden administration would treat violations of the trade pact's labor measures.

But Katherine Tai, head of the agency, said last week she was "not afraid" to use the enforcement provisions of the USMCA, without specifying which issues could come under review.

The powerful U.S. union federation, the AFL-CIO, told Reuters in April it was drafting cases against companies in Mexico under USMCA, and would make details public in May.

Matamoros is one of a string of Mexican border cities which American firms were lured to by cheap labor in recent decades. Its factories supply parts for General Motors Co, Toyota Motor Corp, Stellantis and other automakers.

Booming trade with the United States has brought jobs to areas of northern Mexico but labor rights lag.

Companies in Mexico have commonly fired workers, among other tactics, rather than allow them to agitate for new unions, say activists, scholars and government officials.

"They fire them; they suppress them. They stop giving extra hours. They don't give bonuses. They change them to night shift," said Alfredo Dominguez, head of the Federal Center of Conciliation and Labor Registration, created under the labor reform to ensure collective contracts are legitimate.

One of the labor ministry's priorities is to eliminate so-called "protection contracts," signed between unions and employers without workers' prior consultation or knowledge, which Dominguez said make up at least 80% of all collective contracts in Mexico. The labor reform, once implemented, will also do away with local panels blamed by labor activists for long delays in the process of establishing new unions like Prieto's. The boards will be replaced with tribunals reporting to the judicial branch.

NEW TACTICS Frustrated by delays in setting up a new union, hundreds of Tridonex workers early in 2020 opted for a new tactic: declaring they no longer wanted to pay dues to the established union, SITPME. After several tense protests, Tridonex consented. Then firings began, four workers told Reuters. In March 2020, Efren Ruiz, who cleaned and assembled brake parts for Tridonex and was a vocal advocate of Prieto's union, was dismissed. "This is reprisal," Ruiz remembered telling a supervisor, before security guards escorted him out, he said. Three other workers also said they believed their union activism led to their dismissals. A government record seen by Reuters, dated October 30, 2020, shows Tridonex dismissed 717 people from April to October last year.

Reuters was unable to determine if any have been hired back since. Mexico's Social Security Institute, which tracks employment, said it could not comment on individual companies. Prieto said the firings were retaliation by the company to protect SITPME and prevent more strikes for better pay. SITPME leader Mendoza described complaints of retaliation as "lies." Cardone said in a statement the staff reduction was due to a drop in demand and was "managed through transparent and constructive discussions with employees and relevant trade unions."

SITPME - which extols membership perks such as medical and legal aid - said it lured back at least 3,000 people from different companies who had supported Prieto's breakaway group. Reuters could not independently confirm this. Mendoza noted that he strives for dialogue with companies, not strikes: "What we do well is guarantee labor peace and efficiency in the workforce."