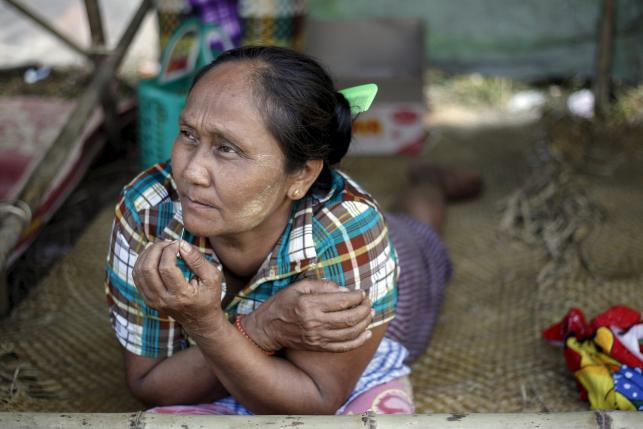 YANGON - Days before democracy champion Aung San Suu Kyi led her lawmakers into parliament as Myanmar's government-in-waiting, Ei Than watched bulldozers sent by the military destroy her house in a slum on the outskirts of Yangon.

Ei Than was one of around 2,500 people thrown off military-owned land at Mingaladon in a mass eviction that gives a glimpse into the challenges Suu Kyi faces in sharing power with the armed forces after nearly 50 years of iron-fisted junta rule.

The land, on the edge of the commercial capital, is owned by Myanma Economic Holdings Limited (MEHL), a sprawling military-owned conglomerate that entrenches the armed forces' grip over swathes of one of Southeast Asia's fastest-growing economies.

Suu Kyi's party won a resounding election victory last November, but must still work with the military because of its continued hold over key cogs of the government machinery.

During the 20 years Ei Than had lived on the land, she had no idea it was owned by the military: like many migrants to the country's biggest city, she built her house on vacant land.

"It was just scrub and bushes when we moved here," she said, breastfeeding an infant in a flimsy shelter covered in plastic sheeting that was erected nearby after the eviction.

Colonel Tin Aung Tun, minister of security and border affairs for the Yangon Regional Government, said he did not know what the land, surrounded by an industrial park housing many military-owned manufacturing plants, would be used for.

"These lands belong to the government," said the colonel, who, as the senior military official responsible for the area, oversaw the evictions. "I had to carry out my duty."

He said those evicted had been offered food, water and temporary shelter at a nearby paint plant. Some had only moved to the site recently in the hope of compensation, he added.

The eviction at Mingaladon took place on Jan. 26, less than a week before winning election candidates from Suu Kyi's National League for Democracy (NLD) were sworn in as lawmakers. When a lengthy transition is completed by the end of March, they will form the party's first majority government.

Land disputes are a difficult legacy of military rule. Rights activists have accused the military and army-linked enterprises of numerous land grabs in recent years.

The NLD has for years worked to support those who have faced forcible evictions, and is compiling a list of land disputes. It is unclear how the party plans to resolve such disputes, given the likely military opposition.

Local NLD members believe the military timed the Mingaladon eviction to avoid any potential opposition from the new government.

"I think they wanted to get this done before the transition," said Nyunt May Tha, chairperson of the NLD in Mingaladon Township, whose son now sits in parliament.

MEHL is one of two powerful military business empires that account for a large chunk of the economy and are involved in everything from growing tea, manufacturing cigarettes and brewing beer to jade mining and banking.

They help fund the military and the pensions and welfare provided to former soldiers, but they do not make their accounts public and their revenues are not shared with the government.

Major Win Myint, manager at the nearby MEHL-owned Myanandar water purification plant, told Reuters the firm owned the land but said he did not know what plans the military company had to develop it.

A local government official declined to comment beyond confirming that the land belonged to MEHL.

MEHL did not respond to Reuters' requests for comment on the eviction and what it planned to do with the land.

Myanmar's junta-drafted 2008 constitution reserves a quarter of seats in parliament for the armed forces, along with control of home affairs, defence and border affairs ministries, whose ministers are chosen by the army chief, not the president.

The Mingaladon evictions were carried out by the General Administration Department (GAD), which runs unelected local governments and reports to the home affairs ministry, according to a copy of the order seen by Reuters.

The day after the order to vacate expired, bulldozers arrived. With them were about 200 policemen and around four times as many other men, some carrying sticks, according to a Reuters witness.

"Nothing can be done while the military is still in charge of the General Administration Department," said Nyunt May Tha. "We'll only be able to get over this if Daw Suu Kyi can talk to the military and fix it."

Government officials told the newly homeless people they would receive compensation and be re-housed. But two weeks after the eviction, those Reuters spoke to said they had received no help.

Hundreds of rickety shelters line a track running through a nearby industrial park. Inside, people cook on portable stoves and eat and talk by candlelight. Some say they moved to Yangon after Cyclone Nargis devastated Myanmar's central delta in 2008. The few possessions Ei Than owns are scattered on the floor, where a dozen dusty children crowd around a portable DVD player. "We are sad, we have nothing," she said. "We don't know if we will get any help or not." -Reuters