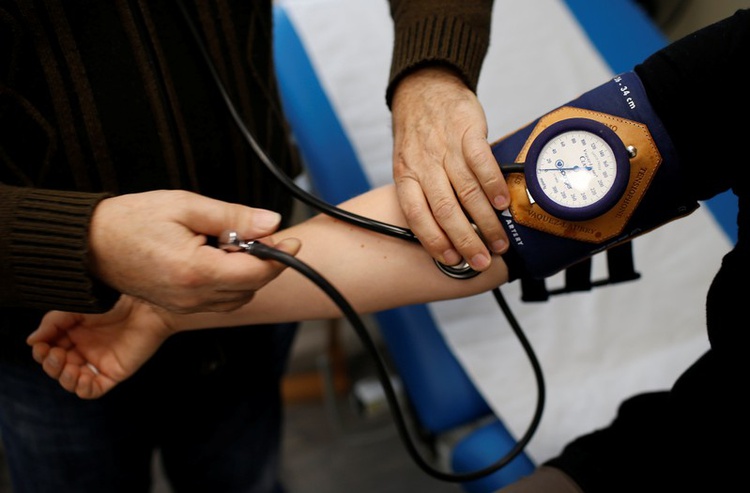 LAVAL, France (Reuters) - When Joelle Dupas falls ill, she goes to a medical centre in her home town in rural western France where all 12 doctors have come out of retirement.
The 66-year-old tried for months to find a doctor after retiring to Laval, a quiet town of 50,000 residents surrounded by rolling fields. Her search ended at the simple centre managed by the 12 veteran doctors, aged between 67 and 70, on the ground floor of an apartment bloc. “You need to wait at least a year to get an appointment with an ophthalmologist,” Dupas, a former secretary and salesperson, told Reuters in the waiting room. “It was not like this years ago.” The Service Médical de Proximité (SMP), where each doctor works a few days a month with the help of medical interns, is a local response to a national problem that has hit Laval hard. Although France enjoys a reputation for having one of the world’s best healthcare systems, it has an ageing population and a shortage of doctors, especially in rural areas. In Laval, only one in five residents is believed to have a family doctor, according to local professionals. President Emmanuel Macron has put rural France at the heart of an overhaul of the healthcare system which he announced on Sept. 18, promising more money and doctors for what he called “healthcare deserts” in areas outside big cities. [nL8N1W43EI] The reforms are an important test for Macron. Success could help reverse a fall in his popularity since he was elected in May 2017, and counter leftist criticism that he is a “president of the rich”. But with opinion polls showing healthcare is a priority for voters, failure could badly damage his presidency. “France obviously has good fundamentals when it comes to healthcare,” said Laurent Chambaud, the director of France’s School of Advanced Studies in Public Health. “But like in many other developed countries, the system, which centres around hospitals, has to reform itself to adapt to social changes.” “If it doesn’t do so in the next five to 10 years, the system will be totally saturated,” he said.

France offers universal healthcare largely financed by government through a system of national health insurance, though many people buy top-up cover. When the World Health Organization conducted its only global healthcare survey in 2000, it rated France’s system the world’s best. But the ageing population, tight budgets and an increase in burnout among doctors have taken a toll. France ranked only 10th in a global study published last year by the Commonwealth Fund, a private U.S. healthcare foundation. It had been ninth in the fund’s previous report in 2014, the only other time France had been included. As in neighbours Germany and Spain, and larger countries such as Australia or Canada, France also has an uneven distribution of doctors, with most attracted by work in cities where they can make more money. Some rural areas also lack hospitals, and hospital doctors staged a strike in 2016 in protest at what they considered poor working conditions and shortages. “We have been alerting authorities for decades and nothing has changed,” said Gilles Ollivier, who serves on a regional doctors’ council in Laval. “Many here live in rural areas where inhabitants, and some of them very old, find themselves in small villages where there are no shops, no post office, no schools and no doctors.” Under Macron’s plans, 400 doctors will be deployed to rural areas where coverage is thin. No hospitals will be closed and 4,000 medical assistants will be recruited to handle paperwork and make basic checks to free up doctors. The president also says he will end a system under which the number of graduates allowed to enter the medical profession each year is limited. Doing so, he hopes, will ensure there are more new doctors interested in working in rural areas.

Laval, on the river Mayenne about 300 km (190 miles) southwest of the capital Paris, is one of the communities where the fate of Macron’s reforms will be played out. It also shows how big a challenge the centrist president faces. The Mayenne region has 255 registered doctors per 100,000 residents, one of the lowest rates in the country, official data show. The national average is 437 and Paris has the highest rate, with more than 1,100 doctors per 100,000. In Laval, the SMP has helped plug the gaps. Fifteen months after it opened its doors, it handles more than 5,500 patients. Its doctors are regulated as others are under the French system. “I had been looking for a family doctor for years but every time I was turned down because they said general practices couldn’t take new patients,” Fatou Diaby, 30, said in the SMP’s waiting room with her two young daughters. “When I last became pregnant, I had nobody to go to except hospital emergencies, which are always packed. Here someone listens.” Mayenne authorities have tried to remedy the situation by helping doctors trained abroad, especially in eastern Europe and the Middle East, to settle in the area. Last year, a third of new doctors entering practice in Mayenne qualified outside France.

Laval’s 12-storey hospital, built in 1974, has more than 1,000 beds and admits 40,000 patients a year but has too few doctors. A lack of funds means some patients summon nurses with old-fashioned handbells. “It is true that we are experiencing some kind of depression,” said Andre-Gwenael Pors, the hospital’s director, citing understaffing, budget constraints and a proliferation of regulations in recent years. Olivier Guihery, a general practitioner who divides his time between a Laval practice and several retirement homes, said he and his colleagues sometimes work 100 hours a week with little or no time for rest or holidays. It is so tough they call it “war-zone” medicine. “We are on the verge of burning out all the time but we have no choice but to continue,” he said. Doctors who spoke to Reuters welcomed Macron’s plans to overhaul the system but also had concerns. Pors said the reforms needed to be spelled out in more detail. Ollivier, the representative of the regional doctors’ council, was wary about the recruitment of medical assistants for basic tasks. “Getting help with the paperwork is great but do we really want these assistants to take blood pressure or body temperature, like in Britain? These are highly sensitive human actions,” Ollivier said. “Many of us are sceptical. We feel like all these decisions are taken in cities and offices, away from the reality of rural areas.”