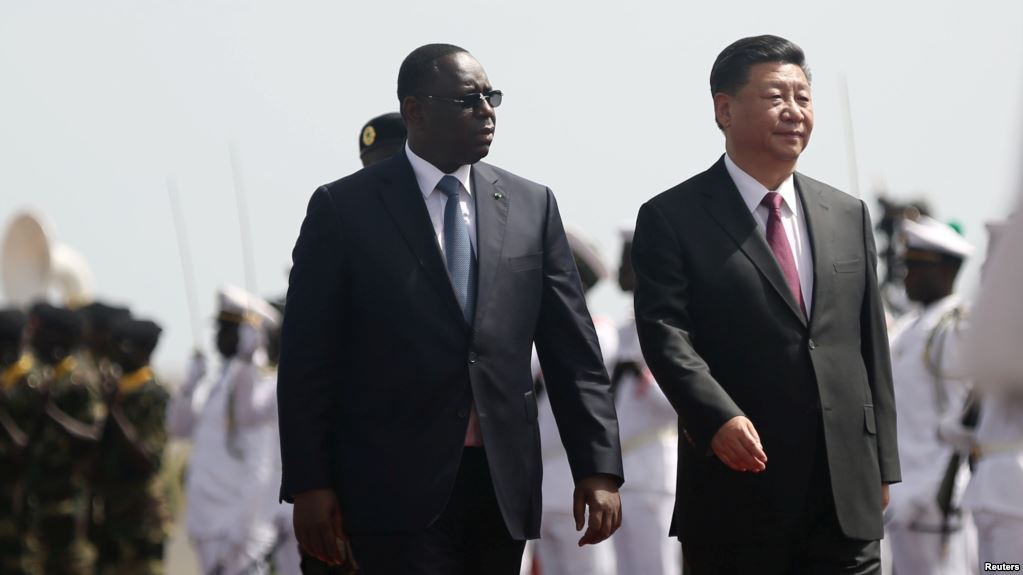 DAKAR (Reuters) - China’s President Xi Jinping pledged during a visit to Senegal to strengthen economic ties with Africa, a continent already awash with cheap Chinese loans in exchange for minerals and huge construction projects. Xi arrived in Senegal for a two-day visit to sign bilateral deals, the first leg of an Africa tour that will also take him to Rwanda and South Africa, the latter for a summit of BRICS countries: Brazil, Russia, India, China and South Africa. China now does more trade with Africa than any other nation does, and its consistent overtures to the continent contrast sharply with the United States, whose President Donald Trump has shown little interest in it. The visit was Xi’s first trip to West Africa as president, but his fourth to Africa, he told a joint press conference with Senegalese President Macky Sall after their third ever meeting. “Every time I come to Africa, I have seen the dynamism of the continent and the aspirations of its people for development,” Xi said. “I am very confident in the future of Sino-African relations.” Earlier, Xi was greeted by a brass band and hundreds of people waving Chinese and Senegalese flags and wearing T-shirts emblazoned with the two leaders’ faces.

Africa is in the midst of a boom in infrastructure projects, managed and cheaply financed by China, part of Xi’s “Belt and Road” initiative to build a transport network connecting China by land and sea to Southeast Asia, Central Asia, the Middle East, Europe and Africa. China has pledged $126 billion for the plan, which has been praised by its supporters as a source of vital financing for the developing world. In Senegal, Chinese loans have financed a highway linking the capital Dakar to Touba, its second main city, and part of an industrial park on the Dakar peninsula. China’s ambassador to Senegal Zhang Xun was quoted by the local press in March as saying China had invested $100 million in Senegal in 2017. “Senegal takes a positive view of China’s role in Africa,” Sall said at the news conference. “For its contribution to peace and stability and equally ... for the financing of budgets.” But critics say Africa is loading itself up on Chinese debt that it may struggle to repay, with estimates ranging in the tens of billions of dollars. That could leave African nations with no choice but to hand over controlling stakes in strategic assets to the Chinese state. US officials have warned that a port in the tiny Horn of Africa nation of Djibouti, a host to major US and French military bases, could suffer this fate, although Djibouti rejects the fear. In Guinea, meanwhile, one of the world’s poorest nations, China is lending $20 billion to the government in exchange for aluminium ore concessions. As well as trade and minerals, China has also seen Africa as a source of political support. Chinese diplomacy has, as of May this year, succeeded in getting every African country except Swaziland to break off diplomatic relations with Taiwan, which China sees as a renegade province.