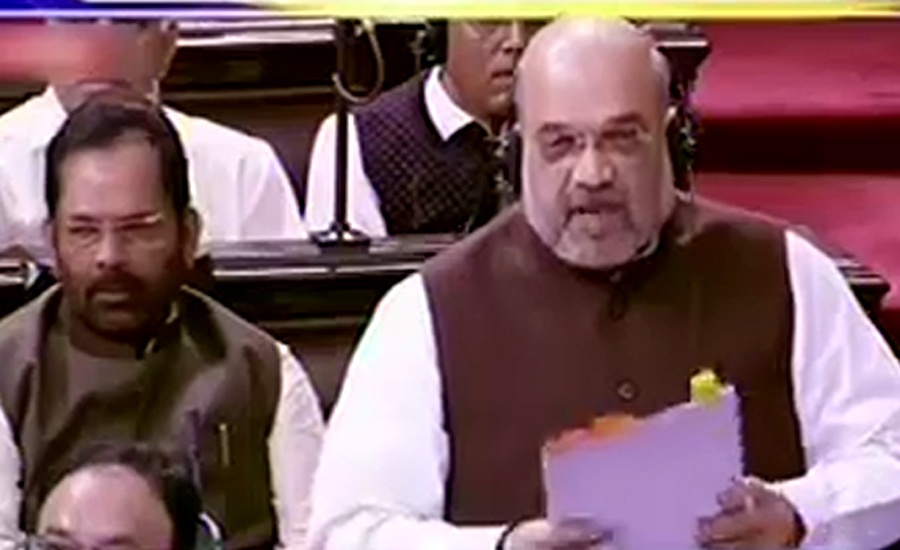 NEW DELHI (Reuters) - India on Monday revoked the special status of Kashmir, the Himalayan region that has long been a flashpoint in ties with Pakistan. In the most far-reaching political move in one of the world’s most militarised regions in nearly seven decades, India said it would scrap a constitutional provision that allows its state of Jammu and Kashmir to make its own laws. “The entire constitution will be applicable to Jammu and Kashmir,” Interior Minister Amit Shah told parliament. The Indian government also lifted a ban on property purchases by non-residents, opening the way for Indians to invest and settle there, just as they can elsewhere in India, although the measure is likely to provoke a backlash in the region. Pakistan, which also claims Kashmir, said it strongly condemned the decision, which is bound to further strain ties between the nuclear-armed rivals. “As the party to this international dispute, Pakistan will exercise all possible options to counter the illegal steps,” the Pakistan Foreign Ministry said in a statement. India and Pakistan have fought two of their three wars over Kashmir, convulsed by a nearly 30-year armed revolt in which tens of thousands of people have died, with hundreds of thousands of Indian troops deployed to quell it. MUSCULAR APPROACH The government has also decided to split the state into two federal territories, one formed by Jammu and Kashmir, and the other consisting of the enclave of Ladakh, citing internal security considerations. “Today marks the darkest day in Indian democracy,” said one of the leaders placed under house arrest, Mehbooba Mufti, a former chief minister of Jammu and Kashmir. “It will have catastrophic consequences for the subcontinent,” she said in a post on Twitter. In Muzaffarabad, 45 km (28 miles) from the two countries’ contested border, dozens of protesters held black flags and burnt car tyres, chanting “Down with India”. Constitution(application to Jammu and Kashmir) Order 2019 pic.twitter.com/ueZWl8VU59

After Amit Shah proposed that the regulation under Article 370 will not be applicable after Presidential nod, the Rajya Sabha witnessed massive uproar with the opposition slamming the Centre over the move. The opposition denied to accept the decision of government and harshly reacted on the bill. Before the introduction of the bill, the Kashmir issue rocked the Rajya Sabha as Congress leader Ghulam Nabi Azad raised the current situation in Kashmir. “Entire Kashmir is under curfew. It’s a war-like situation. Three chief ministers are under house arrest. That should be discussed first,” Ghulam Nabi Azad said in the Rajya Sabha. Earlier today, Prime Minister Narendra Modi chaired the Union Cabinet meet amid tensions in the Occupied Kashmir.

What is Article 370 that the government has sought to revoke:

What is Article 35A?

Article 35A was incorporated in the Constitution by a 1954 Presidential order. This means the article lacks parliamentary sanction. The order was issued by the then President Rajendra Prasad, exercising the powers conferred upon him by the clause (1) of the Article 370 of the Constitution, on the advice of the then Prime Minister Jawaharlal Nehru. Those who are opposing it have argued that Article 35A promotes the two-nation theory which is against the theory of secularism whereas the state parties say that it is a vital bridge between Kashmir and India. Article 35A accords special rights and privileges to the people of Jammu and Kashmir. It empowers the state legislature to define permanent residents of the state. According to the Jammu and Kashmir Constitution, which was adopted in 1956, it defined a permanent resident as someone who was a state subject on May 14, 1954 or who has been a resident of the state for 10 years and has lawfully acquired immovable property. Under this article, the Jammu and Kashmir Legislative Assembly has the power to alter the definition of the permanent resident through a law passed with at least two-thirds majority. So the article bars people from outside Jammu and Kashmir from acquiring any immovable property in the state and no outsider can get a government job. However, it allows Hindus from Jammu and Ladakh regions to settle down in the Valley. The article also denies property rights to a woman if she marries a person outside Jammu and Kashmir. If a woman marries a man outside Jammu and Kashmir, the article has a provision which leads to forfeiting her right over the property. It also applies to their heirs. The article states that only a permanent resident can join any professional college run by the government or get any form of government aid. No one from outside the state is allowed to join such colleges or get funds from the government treasury.