India abstains from voting on a resolution against Israel in UNHRC

India abstains from voting on a resolution against Israel in UNHRC

GENEVA – Keeping in line with its balancing act on the conflict between Israel-Palestine conflict, India abstained from voting on a resolutioncondemning Israel, taken up in the United Nations Human Rights Council (UNHRC). The resolution was about a report made by a UN inquiry commission on the 2014 Operation Protective Edge in Palestinian city Gaza. This indicates a marked shift in India's approach to the Israel-Palestine conflict and a clear sign of the warming up of relations between India and Israel. India was one of the non-Arab countries which recognised the Palestine Liberation Organisation as "the sole legitimate representative of the Palestinian people." In 2006 India had issued a statement strongly condemning the Israeli invasion of Gaza, terming it "disproportionate and excessive". However, spokesperson of India's Foreign Ministry, Vikas Swarup, denied any shift in India's stand on the Israel-Palestine conflict and said that the nation remained committed to the Palestinian cause. "There is no change in India's long standing position on support to the Palestinian cause. The issue in this particular resolution was the reference to the International Criminal Court. As you are aware India is not a signatory to the Rome Statute which established the International Criminal Court. In the past also whenever there has been a human rights council resolution which referred directly to the International Criminal Court as happened in the cases of Syria and North Korea, our general approach had been to abstain. It was in keeping with this principle that India decided to abstain on this particular resolution," said Swarup. The Israeli-Palestinian conflict is rooted in a dispute over land claimed by Jews as their biblical birthright and by the Palestinians, who seek self-determination. Despite repeated attempts to end the conflict between Israelis and Palestinians, there is no peace settlement in sight. Neither side has fulfilled the commitments it made under the 2003 roadmap - a phased timetable designed to lead to a viable Palestinian state alongside Israel, put together by the United States, the European Union, Russia and the United Nations. A total of 41 countries voted in favour of the resolution. Apart from India, four other countries, including Macedonia, Kenya, Paraguay and Ethiopia, also abstained from voting. The United States of America was the only nation which voted against the resolution. The resolution calls for holding Israeli officials accountable for human rights violations. Since Modi came to power in May last year, ties between Israel and India have been in overdrive, with the two signing a series of defence and technology deals that have underscored their burgeoning commercial and political relationship. In October 2014, India closed a $520 million deal to buy Israeli anti-tank missiles. And November last year, a jointly developed aerial defence system passed a major trial, which India called a "milestone". Under Modi's predecessor, Manmohan Singh, India kept its relationship with Israel under wraps, in part so as not to upset its Muslim minority. Strategically, Israel is also glad to have a rising Asian power as an ally. –Reuters 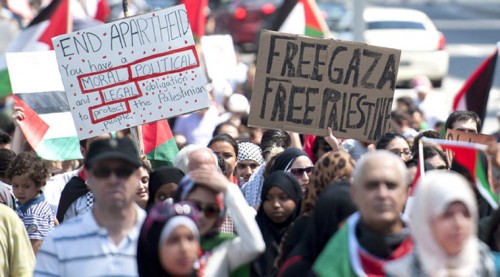