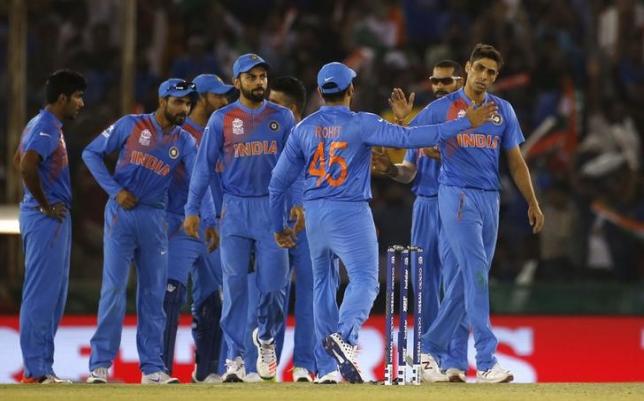 MUMBAI - The second World Twenty20 semi-final is likely to hinge on who emerges on top in the battle between the big-hitting West Indian batsmen and India's wily spinners when the former champions clash at the Wankhede Stadium on Thursday. India, the world's top-ranked side in the shortest format, arrived at the sixth edition of the tournament with 10 wins from 11 matches in 2016 and were considered overwhelming favourites by fans, opposing captains and bookmakers alike. But while an opening Super 10 stage defeat to New Zealand, who reached the semi-finals unbeaten, was a wake-up call, the home side's credentials came into question in a one-run win over Bangladesh, who lost three wickets in the last three balls. Virat Kohli's wide blade was then called on to see off a stiff challenge from 50-over world champions Australia in a winner-takes-all contest to reach the last four, his masterclass glossing over some major batting flaws for the 2007 champions. Shikhar Dhawan and Rohit Sharma have failed to build a solid foundation for the hosts and their opening stands of five, 14, 42 and 23 have put pressure on the middle and lower order to provide a bulk of the scoring. Left-hander Suresh Raina's scores of one, zero, 30 and 10 have not been overly helpful either, and calls for the number four batsman's omission from the team have only gained momentum. Yuvraj Singh's ankle injury in the win over Australia could open the door for Ajinkya Rahane to play at his home ground in Mumbai but the right-hander may be a little rusty, having not been involved in an international match for more than a month. "You can't rely on one batsman, yes the others have contributed, but still at the same time, if we can do a bit more with the bat at the top of the order and the middle overs, I think we will feel the pressure slightly less," India captain Mahendra Singh Dhoni said after the Australia triumph. "Also, it will be good, because still we feel we are batting at 65 percent, barring Virat (Kohli)." Dhoni faces the prospect of lifting a third World Cup for India after leading them in 2007 and again for the 50-overs title in 2011, the wicketkeeper lauded for his exceptional calmness and savvy against Bangladesh as India stole victory. A win on Thursday will take India to a third final in the World Twenty20 under Dhoni after they went down to South Asian rivals Sri Lanka in the last edition in Bangladesh. The strong form of his spinners and accuracy of pacemen Ashish Nehra and Jasprit Bumrah in the death overs will give Dhoni hope of taming the West Indies batsmen on a surface that has done little to help the bowlers in three matches. South Africa saw a 230-run target chased down by England, who were on the receiving end of Chris Gayle's assault when they failed to defend a score of 182. At the same ground, Afghanistan gave South Africa a scare while chasing 209 until they lost too many wickets in the second half of the innings on a surface offering little respite for the bowlers at a ground with relatively short boundaries. Afghanistan also inflicted the only Super 10 defeat on West Indies with their spinners finding a way to restrict their powerful batsmen in Nagpur. The 2012 champions rested Gayle for that game and a hamstring injury to Andre Fletcher, who has since been ruled out of the tournament and replaced by Lendl Simmons, hampered their chase further. But the inability to chase down a modest 124 would have not gone unnoticed and skipper Darren Sammy is hoping it was just a one-off and not a sign of inconsistency. "We have to leave this game in Nagpur," Sammy said. "We'll leave this game here and see it as the blip in the tournament. "Now we have two knockouts to play. Two more steps." -Reuters