India beat Bangladesh by one run in World T20 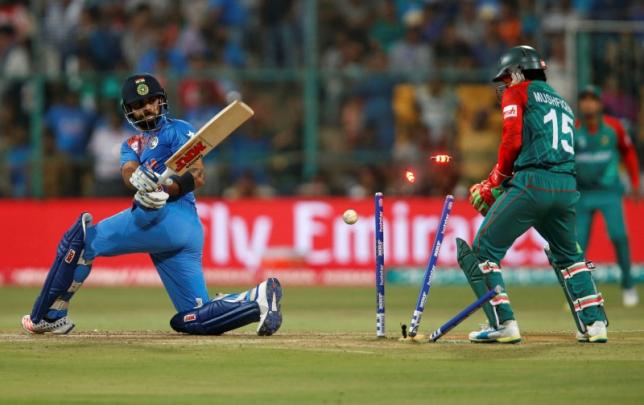 India beat Bangladesh by one run in World T20

BANGALORE – For entirely different reasons, India and Bangladesh were both desperate for the two points on offer in their ICC World Twenty20 Super 10 clash on Wednesday (March 23) night. India’s needed a second successive triumph if it hoped to progress in the tournament, while Bangladesh, beaten in its first two games, wanted the points to salvage pride did everything right, its intent positive and its execution of plans spot-on, reported ICC. India struggled with the bat and ball, and looked set to fall to its first defeat in five Twenty20 Internationals to Bangladesh. Instead, after a crazy final over from Hardik Pandyathat came down to just two runs needed off the last three deliveries, India squeaked home by one run to stay in the hunt and send a packed gathering at the M Chinnaswamy Stadium in Bangalore delirious. Asked to bat first by Mashrafe Mortaza, India laboured to 146 for 7. Then, Bangladesh rode on the returning Tamim Iqbal’s early luck followed by a succession of stunning boundaries, and an aggressive approach all the way through as it appeared to have everything under control. India, though, fought back with the ball in the second half of the chase so that when the last over began, 11 were needed. When Mushfiqur Rahim slammed successive boundaries, it appeared all over. Then, Rahim fell on the pull, Mahmudullah was brilliantly caught under great pressure by Ravindra Jadeja and Mustafizur Rahman was run out by Mahendra Singh Dhoni off the last ball as India got out of jail in spectacular fashion, Bangladesh falling tantalisingly, heartbreakingly short at 145 for 9. Tamim had missed Bangladesh’s defeat to Australia with food poisoning, but he looked none the worse for wear as he gobbled up the Indian bowling for dessert. He rode his luck and lashed Jasprit Bumrah for four fours in the next over to offset the early loss of Mohammad Mithun. Tamim wasn’t Bangladesh’s only aggressor. Sabbir Rahman, cheeky and feisty, took on R Ashwin and Pandya, Shakib Al Hasanplonked two giant sixes on the on-side and Soumya Sarkar rounded off an excellent evening with a run-a-ball 21. India stayed in the hunt by striking one blow after another, but it could never string together a block of three or four pressure-building overs as the revamped Bangladesh batting with experience spread astutely through the order looked on course for a famous victory. Until those final three mad deliveries that seemed to last a lifetime. Once again, India’s batting was pegged back by a disciplined performance with the ball by Bangladesh. The intensity levels in the field were high and the fact that Mortaza worked the bowling changes and the field placements well didn’t hurt either. The bowling wasn’t just tight, it was intelligent too with the spinners giving the ball enough hang-time and therefore getting it to grip and stop, while Mortaza himself showed the way for the pacers, and Mustafizur and Al-Amin Hossain followed admirable suit. Rohit Sharma and Shikhar Dhawan were involved in the odd running mix-up but generally worked the ball around quite well before hammering huge sixes in response to the crowd’s urgings in Mustafizur’s second over. Suddenly, the run-rate clambered to the 7s when, off the last ball of the last Power Play over, which fetched 15, Rohit top-edged an attempted slog-hoick, the steepling skier masterfully held by Sabbir at midwicket. Dhawan perished in the next over, trapped by front by a full Shakib ball, and with batsmen who had spent time in the middle back in the dugout, it was reconstruction time again for two new batsmen. Suresh Raina and Virat Kohli struggled to come to terms with the conditions; Kohli's timing was all awry and the fluency that lit up the Eden Gardens four nights previously was all too conspicuous by its absence. It was left to Raina to provide the impetus with two booming sixes off Al-Amin to put an end to a 29-ball boundary-less phase. Kohli finally found reward for a stroke in anger, clubbing Shuvagata Hom over midwicket for six, but he was bowled next ball, a slog-sweep going through the gate to knock middle pole back and ending a stand of 50 off 40 deliveries for the third wicket. Reprising the Asia Cup clash between the sides in Mirpur just under a month ago, Dhoni pushed Pandya ahead of Yuvraj Singh and himself, and it rounded off India’s best batting phase of the innings – overs 11 through 15 – as the young man made his intentions clear with a towering second-ball six. Raina watched Pandya then take a shine to Shakib with successive fours as 28 came off overs 14 and 15. India had amassed 53 in the third quarter of the innings and looked ideally placed for a final assault when Al-Amin changed the complexion of the innings with two wickets with the first two deliveries of the 16th over. Raina was caught on the pull first ball at deep midwicket, a good running catch by Sabbir, while Soumya Sarkar was truly sensational next ball. Pandya connected brilliantly with a pull that flew hard and flat towards square-leg. Sarkar hared to his left and put in a full-length drive to hold on to a screamer. Rocked by those twin blows, India only managed 11 runs between overs 16 and 18. There was to be no grandstand finish even though four fours came in the last two overs. At the interval, it appeared as if India was 10-15 runs light. In the end, it was one to the good, as it turned out.