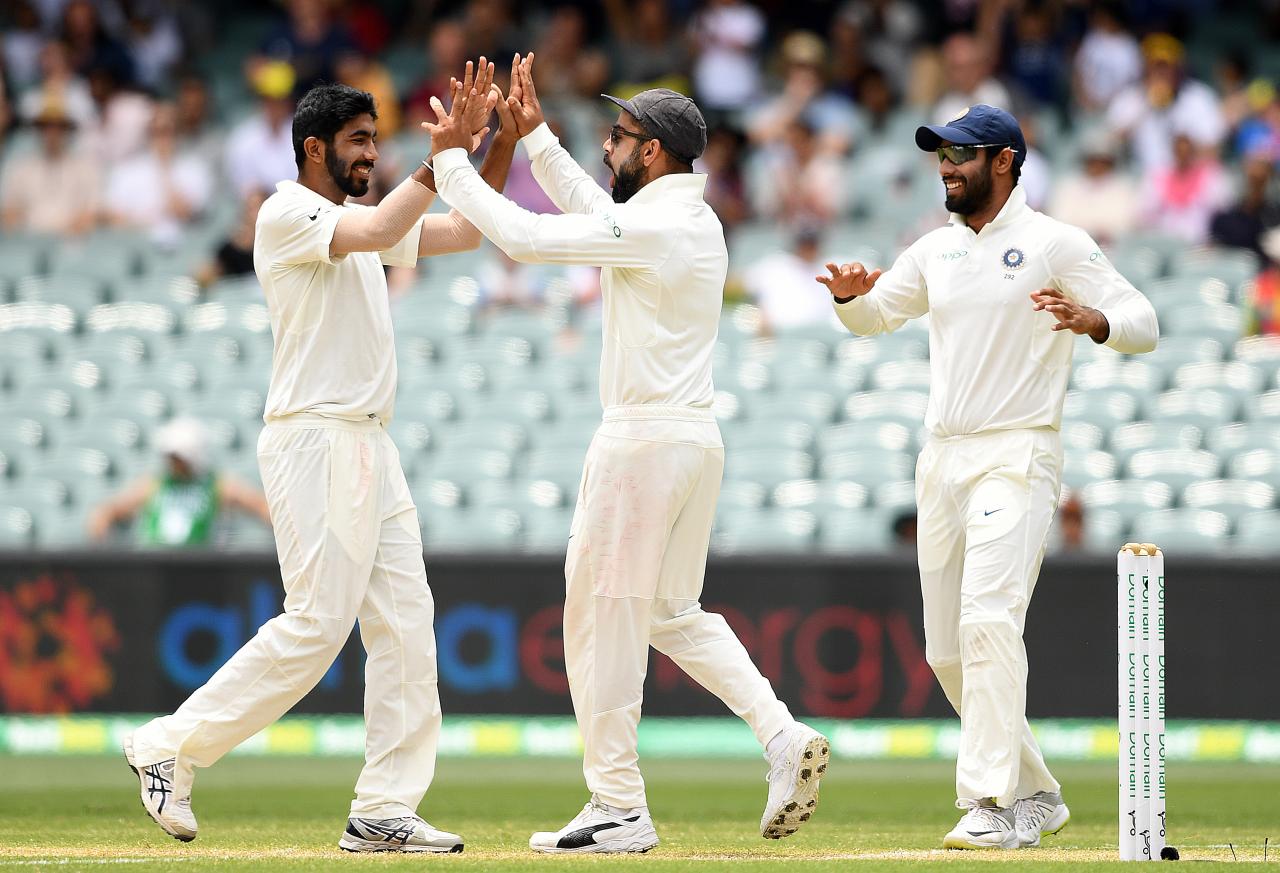 ADELAIDE (Reuters) - India crushed a lower-order insurrection to secure a nerve-jangling 31-run victory in the first Test against Australia on Monday, raising the South Asian nation’s hopes of a breakthrough series win Down Under. The tourists had to work hard to remove Australia’s last four batsmen on the final day at Adelaide Oval but finally broke through at the end of an extended middle session to send India’s travelling fans into raptures. Faced with a docile wicket and tenacious tail-end slogging, Virat Kohli’s team bowled with patience and determination to claim India’s first win in the country since Anil Kumble’s men beat a Ricky Ponting-led Australia by 72 runs in Perth in 2008. It was also India’s first win in a test series-opener in Australia and they will head to Perth for the second of the four matches full of confidence. “Obviously it’s a great feeling, we’ve never taken a lead in a series in Australia,” said Kohli, who scored back-to-back centuries in a 48-run loss in Adelaide during the 2014/15 tour. “I think our fast bowlers came in and bowled with great heart but we knew (Australia) were not going to throw in the towel.” Spinner Ravichandran Ashwin took the final wicket of Josh Hazlewood for 13 to dismiss Australia for 291, with Nathan Lyon unbeaten on 38 after a valiant chase of 323 for victory. After suffering defeat in their first home test without the suspended Steve Smith and David Warner, Tim Paine’s Australia will go into the second match with batting worries confirmed. On a pitch that presented few demons, only two home batsmen managed scores above 50 across the match, with a majority of victims falling due to poor shot selection. “It’s pretty shattering,” Paine said. “Really proud of the fight of the lower order but I think over the five days we had a number of opportunities to get ahead of the game but failed to capitalise on any of them and India thoroughly deserved to win.” Kohli’s side banked 123 and 71 from man of the match Cheteshwar Pujara, while Ajinkya Rahane chipped in a vital 70 in the second innings against a world class seam attack. India have been excited by their own pace bowlers and they delivered when it counted. Mohammed Shami had 3-65 in the second innings and Jasprit Bumrah (3-68) made key breakthroughs on day five. Ishant Sharma started the ball rolling by taking Travis Head’s wicket for 14 in the morning. Under pressure after a dreadful run of scores, Shaun Marsh was removed by wicketkeeper Rishabh Pant for 60, leaving wicketkeeper Paine and tail-ender Pat Cummins to scrap desperately to lunch. Paine had treatment for a hand injury before the break and was out slogging for 41 soon after before Mitchell Starc kept the terraces entertained with a typically swashbuckling innings of 28. Mohammed Shami broke through to remove Starc, with Pant catching the edge to equal the world record of 11 dismissals shared by AB De Villiers and Jack Russell. Pant dropped a diving, one-handed chance that would have given him sole possession of the record when Bumrah coaxed a nick off Cummins (28). But the Indian bowler got Cummins eventually, with an edge flying to Kohli in the slips. No team had scored more than 315 runs in a successful run chase at Adelaide Oval but Lyon and Hazlewood kept the crowd entertained in a final 32-run stand before falling short.