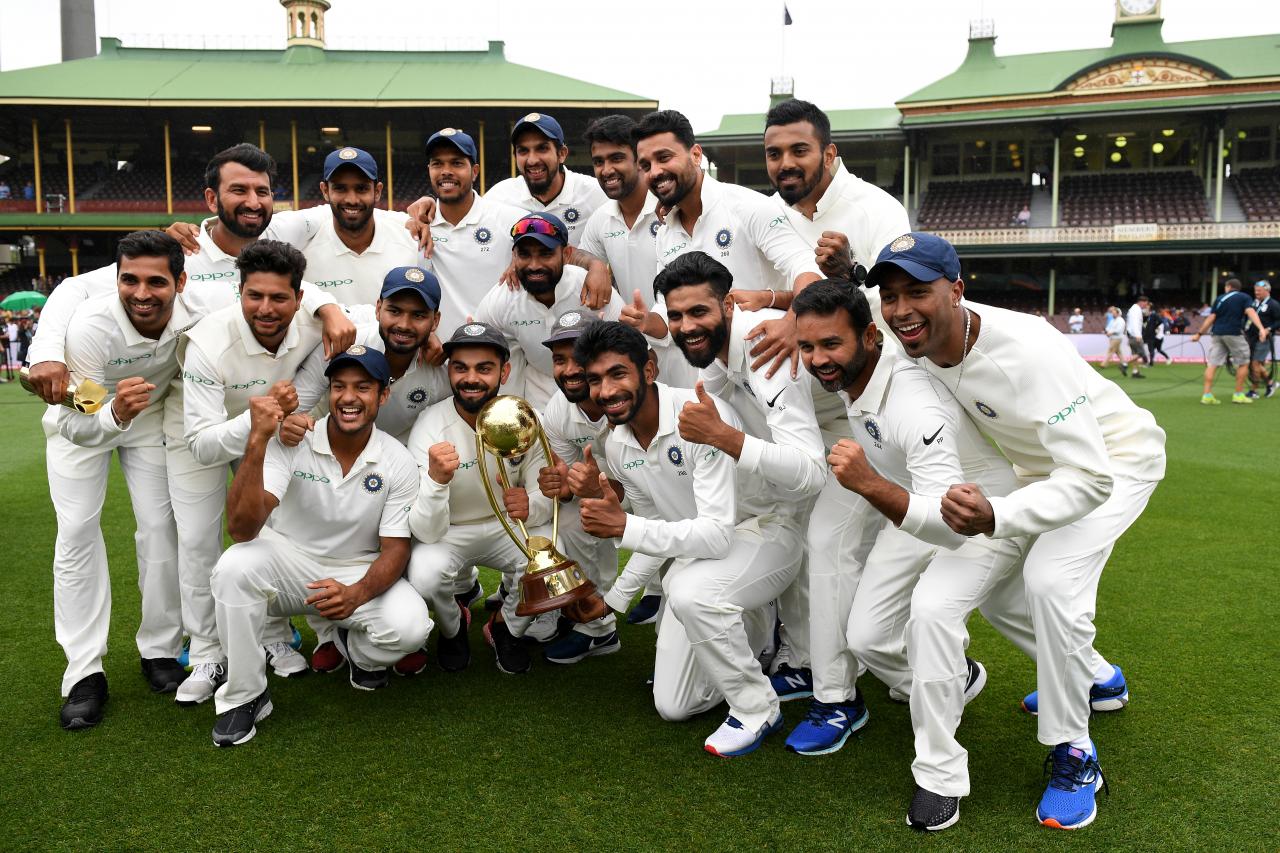 SYDNEY (Reuters) - India ended a 71-year wait for a Test series victory in Australia on Monday, their 2-1 triumph finally confirmed when the rain-affected fourth and final Test ended in a draw at Sydney Cricket Ground early on Monday afternoon. The finale may have ultimately have turned out to be a damp squib but Virat Kohli’s tourists utterly dominated what action there was to deservedly become the first side from the Asian sub-continent to take the honours Down Under. Wins in the first Test in Adelaide and third in Melbourne ensured they could not lose the series and their batsmen, led by a 193 from Cheteshwar Pujara, batted Australia out of the fourth match with a daunting 622-7 declared total in the first innings. That all but destroyed home hopes of a face-saving victory and India’s spinners then got to work to drive home the advantage in the field against an Australia side that failed to muster a single century over the series. The hosts were duly dismissed for 300 and Kohli did not hesitate to go for the jugular by enforcing the follow-on — the first time in 30 years Australia had suffered such ignominy on home soil. Ultimately, it was the Sydney weather that saved Australia from a 3-1 humiliation with no play possible after tea on day four, when they had mustered up six runs without loss in their second innings. “It’s obviously a very proud moment. More so because for the last 12 months we understand what we have gone through as a team,” said Kohli. “The fact that the reward has come in the most historic series for Indian cricket is the cherry on the top of the cake. “In the 10 years that I have played, it is the proudest moment that I have experienced and we’re so happy for the whole team. “It is a young bunch of guys and to have that belief to keep striving for excellence on a daily basis and to get a reward like this we definitely have to be happy.”

For some Australians the series will always carry an asterisk given their two best batsmen, Steve Smith and David Warner, were unavailable because of bans they received for the ball-tampering scandal in South Africa last year. Tim Paine’s side were unable to paper over the cracks left by their absence, and even the vaunted pace attack of Josh Hazlewood, Mitchell Starc and Pat Cummins failed to fire, except for spells in the victory in Perth. “I thought we actually had our chances to win the Test match in Adelaide, India just outplayed us in big moments in that Test,” Paine said. “In Perth, I thought we played a very good game of cricket but when we went to Melbourne and Sydney, we’ve been outplayed in all departments.” India’s trio of seamers Ishant Sharma, Mohammed Shami and Jasprit Bumrah, by contrast, were highly disciplined and executed their plans to perfection to exploit the weaknesses in the Australian batting. “I feel great standing in the slips cordon and watching these guys run in,” said Kohli. “You can see that hunger and that passion to win for India. We put everything on the line to win for the team. “They take ownership of their skills. They are dictating terms now which is the most amazing thing you can ask for from your bowlers.” With the bat, the tourists managed to score five centuries over the four matches with Player-of-the-Series Pujara recording three of them, aggregating 521 runs from seven innings at an average of 74.42. There was a century for captain Kohli, of course, and one in Sydney for the younger generation through the irrepressible wicketkeeper Rishabh Pant. India have still never won a series in South Africa but finally breaking through in Australia will do much to burnish the reputation of Kohli and a team already ranked number one in the world in the longest format of the game. “This is an Indian team that will jump over a cliff to win a game for their country,” said coach Ravi Shastri. “That’s the determination and the ruthlessness, the mindset with which this team went out to play in this series. “This team now has an identity to look at any other Indian team from the past in the eye without being intimidated and say ‘We play proper Test match cricket. You did, and we do too’.”