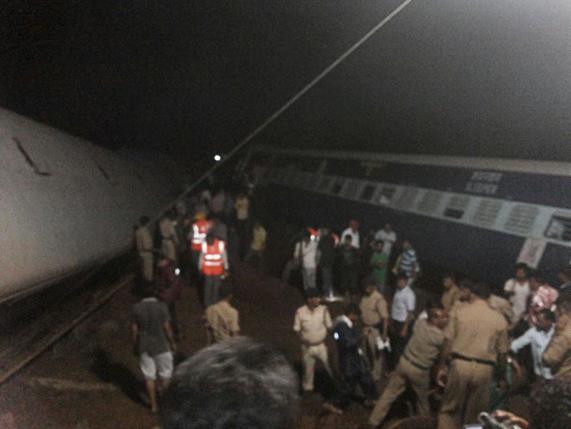 NEW DELHI - Two express trains derailed into a river in central India overnight after flood water weakened the tracks, killing at least 20 people and injuring 100, the government said on Wednesday. Divers using gas cutters pulled out trapped passengers and 300 had been rescued by early morning, officials said. Dozens were rushed to hospital in critical condition. "We are trying to rescue passengers. Relief work is going on a war footing. We are checking all carriages to look for trapped passengers," said ministry spokesman Anil Saxena. Twelve coaches of the Kamayani Express to Varanasi from Mumbai derailed near Harda in the central state of Madhya Pradesh just before midnight. Six coaches of the Janata Express derailed around the same time, the railway ministry said. Heavy monsoon rains and the tail-end of a cyclone have killed more than 100 people across India in flooding, landslides and building collapses in recent days. Train wrecks killed more than 25,000 people on India's overloaded and outdated railway network last year alone. A former railway minister said if the tracks had been maintained, the latest accident could have been avoided. "It's totally unacceptable. It's a symptom of a deep-rooted cancer in the railway system," Dinesh Trivedi told reporters. Prime Minister Narendra Modi this year massively increased spending to modernize the network, but improvements will take years. The head of the railway board, A.K. Mittal, however told reporters a flash flood struck the area just minutes before the trains came through, disturbing the tracks. "Ten minutes back at this spot, train movement was normal. There was no problem." India's state-run railway network carries some 23 million passengers every day. "The two train accidents in Madhya Pradesh are deeply distressing. Deeply pained over the loss of lives," Modi tweeted. -Reuters