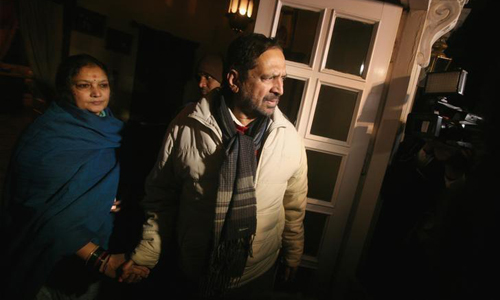 MUMBAI - The Indian Olympic Association's (IOA) move to honour two controversial administrators has infuriated the government with the sports ministry cutting off funding and the use of other facilities extended to the body. The IOA named its former presidents Suresh Kalmadi and Abhay Singh Chautala as life presidents on Tuesday, a decision that has been heavily criticised after both are facing allegations of corruption. Kalmadi spent nine months in jail after the allegations, stemming from the 2010 Commonwealth Games in Delhi. He was released pending an appeal to Delhi High Court and has steadfastedly denied any wrongdoing. Chautala is also facing unrelated corruption charges in an ongoing court case. He has also denied the allegations. "IOA will cease to enjoy the privileges and prerogatives bestowed on it by the Government as the National Olympic Committee (NOC)," the sports ministry said in a statement. "All Government assistance, financial or otherwise, to IOA will also be stopped." Kalmadi has declined the post until his case has been heard, while Chautala, who was initially adamant to stay on in the patron's role, has hinted at stepping down. The IOA sought time until Jan. 15 to reply to a sports ministry notice, citing its president Narayana Ramachandran was abroad, but the ministry dismissed it as a "ploy" to buy time. "Although the Government has utmost respect for the Olympic Charter and is committed to protecting the autonomy of sports, it cannot remain a mute spectator to blatant violation of principles of ethic and good governance by IOA..." the ministry said. Former shooter Abhinav Bindra, India's first individual Olympic gold medallist, welcomed the suspension of the IOA, which is perceived in cricket-mad India as a clumsy organisation relying mostly on government largesse and run by politicians who are opposed to new faces and fresh ideas. "The @Olympics movement and specially the movement in India can no longer hide behind autonomy. It's the age of good governance and ethics," tweeted Bindra, who won the 10m air rifle gold in 2008 Beijing Olympics. -Reuters