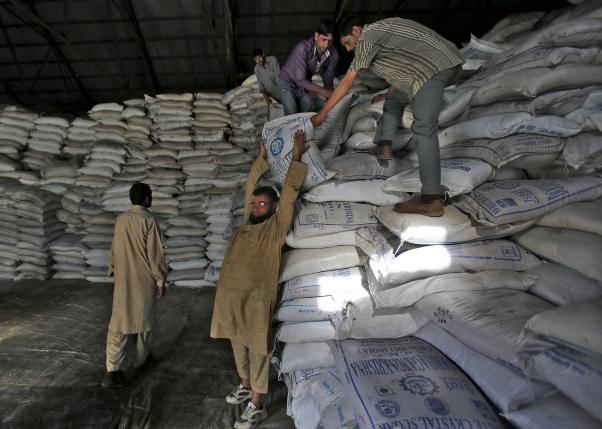 NEW DELHI - India is likely to bring in rules to make it compulsory for sugar mills to export millions of tonnes of surplus supplies to support local prices, sources said, in a move that could quell growing anger among farmers but add to a glut on global markets. A final decision rests with Prime Minister Narendra Modi, who discussed the politically sensitive issue at a weekend meeting with ministers, officials and sugar mill bosses, said the two government sources. The proposal, which could mean mills selling at loss, comes at time when the world sugar market is grappling with a flood of supplies and prices at 6-1/2-year lows SBc1. The mandatory export rule, which could be introduced from the start of the next crop year on Oct. 1, would apply only when output was higher than local demand, said the officials, who are directly involved in formulating the policy. If approved, India could overtake Australia as the world's third-largest exporter behind Brazil and Thailand. Food ministry spokesman N.C. Joshi declined to comment. Apart from boosting farm exports, government-backed overseas sales of sugar could also help mills clear about $2.5 billion they owe to 50 million cane growers - a group equivalent in size to the population of Spain and concentrated in politically important states like Uttar Pradesh and Maharashtra. Last year, Modi won 9 out of 10 seats in Uttar Pradesh, which sends the highest number of lawmakers to parliament, as rural voters were swayed by a pledge to keep crop prices high. But mills have been struggling to pay the fixed price to cane farmers, who have been losing patience as the amount of money they are owed piles up. India, the world's largest sugar consumer and biggest producer after Brazil, has been producing more sugar than it needs for the past five years and the trend is likely to continue. SMALL TAX At last Saturday's meeting, there was also discussion on an additional tax, which the government calls a cess, on sugar to prop up domestic prices that are the lowest in six years, said the officials. "Mandatory exports may force mills to sell sugar at a loss now, but they would (eventually) gain because lower domestic stocks mean higher domestic prices, which will get a leg up because of the cess," said one of the sources. India's mills are expected to produce 28 million tonnes in the next season, when inventories will climb to 10.3 million tonnes, up from 7.5 million tonnes at the start of the current season. Indians consume 24-25 million tonnes of sugar a year, thus could easily export 5-6 million tonnes yearly even after stocking up for emergencies, analysts said. That would be more than the 3 million tonnes that Australia sells and compares to Brazil's exports of 27 million tonnes and Thailand's 10 million tonnes. The sources said the government may also step in to help mills pay dues by using funds raised from the tax. The federal government fixes the price that mills pay to cane growers yearly and some states, invariably, raise it further. In the past six years, government-set prices have soared by 70 percent but sugar prices have slumped to 2,200 rupees (21.87 pounds) a tonne, against an average cost of production of 3,100 rupees. Experts say the higher cane price is the main reason for the surplus which has helped avoid sharp output swings, such as when India had to import 4.3 million tonnes in 2008/09 after exporting 5 million tonnes a year earlier, pushing benchmark New York prices to a 30-year high. Despite an export incentive of 4,000 rupees a tonne, India's overseas sales are expected to be only 800,000 tonnes in the 2014/15 season against 2.2 million tonnes in the previous year. Abinash Verma, director general of the Indian Sugar Mills Association, said the push for exports could lead to further losses at mills but eventually mean a balance between demand and supply at home. -Reuters