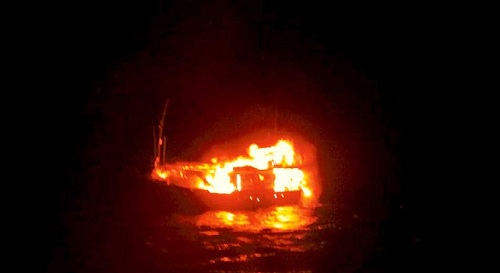 LAHORE (92 News) – India has ordered an inquiry after DIG Coast Guard BK Loshali claimed that he ordered destruction of a Pakistani boat on December 31 last year. In response to this development, Minister of Defence Khawaja Muhammad Asif said Pakistan's desire for peace should not be misconstrued as its weakness. Loshali’s statement has contradicted the Indian government's version that the boat laden with explosives was intercepted by the coast guard because it was planning an unspecified illegal transaction and the people on board set it on fire, causing it to explode. However, Loshali later said he was misquoted and he was not reported factually. Defence Minister Khawaja Asif has urged the international community to take notice of blowing up of the Pakistani boat by India, in which four innocent people were killed. He said the admission of the DIG Coast Guard negates earlier claims of the Indian government that the boat blew itself up. He said once again it has been established that India violated international law. The Defence Minister said Pakistan's desire for peace should not be misconstrued as its weakness. After Loshali’s denial to own his earlier statement the Indian Express newspaper broadcast video of the officer, BK Loshali, saying he had ordered the destruction. He reportedly said, "Blow the boat off. We don't want to serve them biryani."