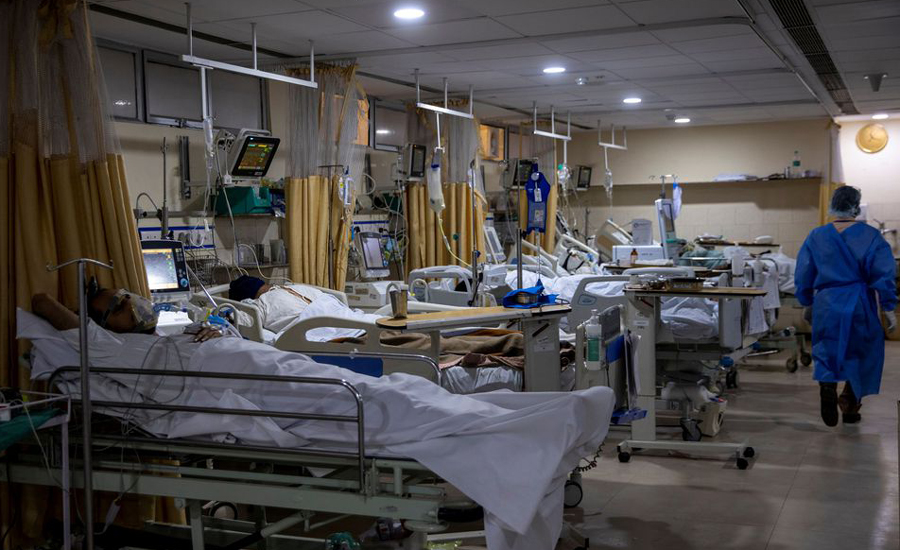 NEW DELHI (Reuters) – Nearly two-thirds of people tested in India have shown exposure to Covid-19, a chain of private laboratories said on Thursday, indicating a runaway spread of the virus as the daily death toll rose to 3,874.

India reported 267,110 new daily infections on Wednesday, taking its tally to 25.5 million, the world's second highest after the United States, with a death toll of 283,248, health ministry data showed.

For months, nowhere has been hit harder than India by the pandemic, as a new variant discovered there fuelled a surge of up to more than 400,000 new infections a day.

Only the United States has had a worse single day death toll, when it lost 5,444 people on Feb. 12, a Reuters tracker shows.

And with hospitals and crematoria overflowing and the health system overwhelmed, it is widely accepted that the official figures grossly underestimate the real impact of the epidemic, with some experts saying infections and deaths could be five to 10 times higher.

There are fears that the new, highly infectious variant is out of control and that many cases are going unreported because of lack of testing, particularly in the vast countryside.

Data from Thyrocare, a chain of private laboratories, appeared to back up those fears, showing that 63.5% of people tested positive for COVID-19 antibodies on average over the last seven days, up from 45% a month ago.

The data from 25 states included individuals infected in the past, vaccinated, uninfected and those who had not been vaccinated, the company's Chief Executive Arokiaswamy Velumani said on Twitter.

Criticism of Prime Minster Narendra Modi has been rising but M. Govinda Rao, a former member of the Economic Advisory Council to the Prime Minister, said the rate at which the virus was spreading had caught everyone by surprise.

"The unprecedented speed at which the second wave of the pandemic spread completely took the (state) governments as well as the people off guard," Rao told the Hindu newspaper.

FEW TESTS IN THE HINTERLAND

But that still falls short of India's claimed daily testing capacity of 3.3 million, said Rijo M John, a professor at the Rajagiri College of Social Sciences in the southern city of Kochi.

John also questioned how useful the results of the tests were.

"Many of these tests are being deployed in urban centres, where cases may have peaked and so it doesn't serve much purpose," John said.

"It's time they were diverted to more rural areas, but I doubt that is being done."

Polling agency CVOTER found that for the first time in the seven years Modi has been in office there were more people expressing dissatisfaction with his government's performance than satisfaction. read more

Hospitals have had to turn patients away while mortuaries and crematoria have been unable to cope with bodies piling up.

Photographs and television images of funeral pyres burning in parking lots and corpses washing up on the banks of the Ganges river have fuelled impatience with the government.

India is the world's largest vaccine maker, but criticism has also mounted over its slow vaccination campaign, plagued by a lack of supplies.

The government said about 98% of the population of 1.3 billion remained susceptible to infection.

India halted vaccine exports a month ago after donating or selling more than 66 million doses, and government sources told Reuters it was unlikely to resume major exports of vaccines until at least October as it prioritises domestic needs.