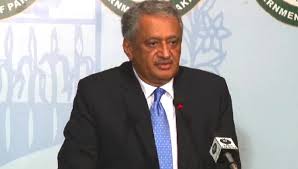 ISLAMABAD (92 News) – Pakistan Foreign Office spokesman Syed Qazi Khalilullah has said that India should stop leveling allegations against Pakistan’s involvement without proof in any terrorist activity on Indian soil. Addressing a weekly press conference, the spokesperson said that they called on Indian Deputy Head of Mission and recorded their protest against Indian ceasefire violations. The spokesman said that the Indian government should share evidence of Pakistani involvement in any incident. “We are in contact with the Indian High Commissioner to Pakistan regarding the Indian girl Chanda Bibi, adding that Indian High Commissioner has met with the girl.” Commenting on the Indian allegations of militant detained in Srinagar, he said that the Indian claims are baseless as no record of detained Usman was found, adding that they waiting for India to provide information on Mumbai Attack. Commenting on the Altaf Hussain issue, Qazi Khalilullah said that the government has not given any task in this regard. He said that Pakistan wants to have peaceful ties with the neighbouring countries. The spokesman said that the prime minister Nawaz Sharif will visit Belarus on the invitation of Belarus President on August 10. During the visit, the Prime Minister would hold delegation-level talks with the President and the Prime Minister of Belarus. “Both leaders will sign Memorandum of Understanding and different agreements.”