India should avoid war otherwise its impact to be felt by whole world: President

India should avoid war otherwise its impact to be felt by whole world: President

ISLAMABAD (92 News) – President Dr Arif Alvi has said that India should avoid the sores situation of war otherwise its impact to be felt by whole world. He was addressing as Chief Guest at an impressive flag hoisting ceremony at Jinnah Convention Center in Islamabad today, in connection with the 73rd Independence Day of Pakistan. “We do not wish war but we will fully defend ourselves if war is imposed on us. The war will not be limited between the countries, rather its impact will be felt in the whole world,” the president said. He urged India to be reasonable. The president also asked the nation to fully utilize social media to expose the heinous crimes committed by India against Kashmiris. He also said that India should not take situation where return will become impossible. He has reiterated Pakistan's commitment to always stand with its Kashmiri brethren in their just right to self-determination. “We are for Kashmiris and they are for us. Their plight and affliction affects us,” the president said. He said immediately after India's unilateral steps on Kashmir, government of Pakistan suspended bilateral trade with India, downgraded diplomatic relations and decided to take the issue of Kashmir to UN Security Council. The President said the joint resolution of parliament on 7th of this month condemned the unilateral and illegal steps taken by India to change the disputed status of Kashmir. Pakistan does not accept the efforts to change the demographic composition of occupied territory. Dr Arif Alvi said India has not only violated the UN resolutions on Kashmir but also threw the agreement of Shimla to dustbin. The Indian act of changing the status quo contravenes the Shimla Agreement. He said the presence of nine hundred thousand troops has made Kashmir the highest militarized zone. He said the blocking of communication and freedom of expression is a serious violation of human rights of Kashmiris. The president urged India to stop its brutal treatment of Kashmiris, grant communication access to people and restore civic and social liberties of the people of the occupied territory. He said India has also been violating the ceasefire agreements by firing and shelling on civilian populations along Line of Control (LoC). He said Pakistan is a peace loving country and wants message of peace in love. It wants to resolve the issue of Kashmir through negotiations and dialogue. However, India should not misunderstand our policy of peace as our weakness. President demanded human rights arm of the UN and OIC to constitute an inquiry commission to probe the human rights violations in Occupied Kashmir. Dr Arif Alvi appealed youth of the nation to value the country as a blessing and never forget the sacrifices of our great leaders. He urged the youth to devote themselves to the development and reconstruction of the country.  He also asked them to be proud of their social values. The president paid rich tributes to sacrifices and dedication of armed forces of Pakistan. He said they have never let any damage done to the country by displaying their courage and professionalism. Earlier, the Chief Guest President Dr Arif Alvi hoisted the flag at the ceremony. 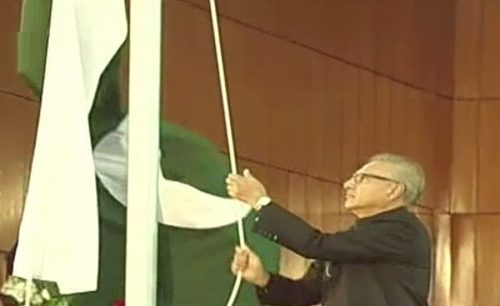 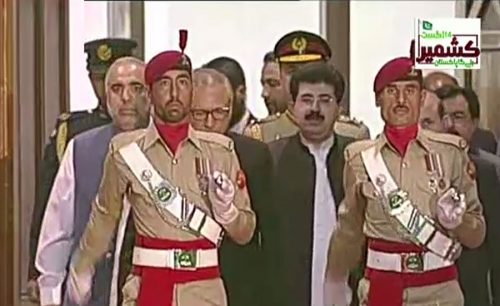