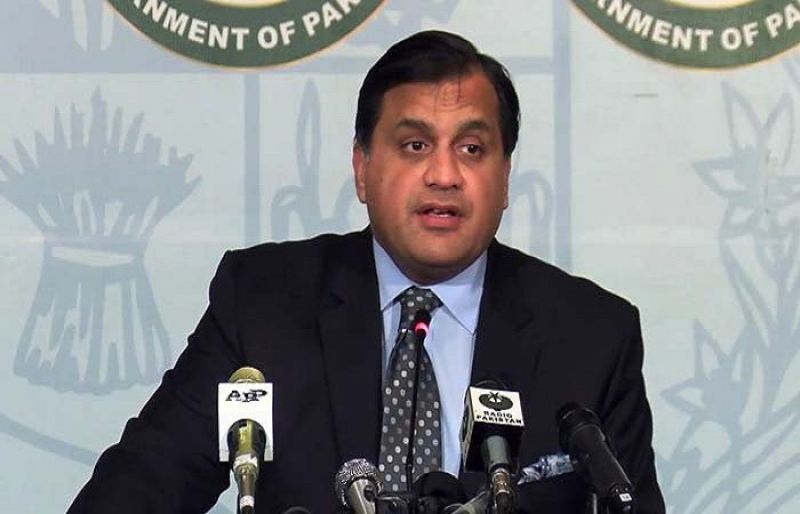 ISLAMABAD (92 News) – Foreign Office (FO) spokesperson Dr Muhammad Faisal has said that India should know increasing defence budget won’t make any difference, however, the passion counts to defend the sovereignty of the country. At his weekly news briefing on Thursday – about India’s decision to increase its defence budget – he said that the increase is aimed at pushing the region into an arms race. “India should know that increasing defence budget alone won’t make any difference,” the spokesperson said in a reference to the Feb 27-28 military exchanges between the two neighbouring countries. “Passion to defend the country’s sovereignty counts,” he clarified.

The FO has urged the World Bank to fulfill its responsibility regarding empanelment of Court of Arbitration for resolution of water related disputes between Pakistan and India. The FO spokesperson reacted strongly to the recent statements of Indian leadership on the Indus Water Treaty. The spokesperson said both Pakistan and India are signatory to the treaty but regretted that New Delhi is violating it. “We are involved in the dispute resolution mechanism in the World Bank but lamented the matter has not been sorted out,” he said.

To a question, the spokesperson said that Pakistan has consistently been raising Kashmir dispute at all the international forums to highlight the plight of oppressed Kashmiri people. Dr Faisal recalled that the Foreign Office summoned the Indian deputy high commissioner and lodged a strong protest over the recent ceasefire violations along the Line of Control (LoC) that led to the martyrdom of three civilians.

He said Pakistan expressed deep concern over Indian Finance Minister Arun Jaitley’s remarks to have “Pakistan downgraded on the FATF list.” “The State Bank reconfirms Pakistan’s longstanding concerns that the FATF’s technical forum is being politicised by India against Pakistan,” he said.

About the recent cross-Afghan border attack that killed three soldiers of the Pakistan Army, he said Pakistan lodged a strong protest with the Afghan government over the terror incident. The spokesperson said Pakistan has conveyed its strong reservations regarding continued presence of such nefarious elements in Afghanistan. He said we have also urged the Afghan government to take action against these elements. The FO said Pakistan has always advocated for peaceful settlement of the Afghan conflict through an Afghan owned and Afghan led peace process.

The spokesperson said the situation in Libya is very grave and that Pakistani mission in the country has taken necessary measures for protection of Pakistanis living there.

Responding to a question, the spokesperson confirmed the departure of Asiya Bibi to Canada saying she is a free citizen and she left the country on her own free will.

Live telecast of the Spokesperson’s Weekly Briefing can be accessed on the following link:https://t.co/7YXtwpPNzV