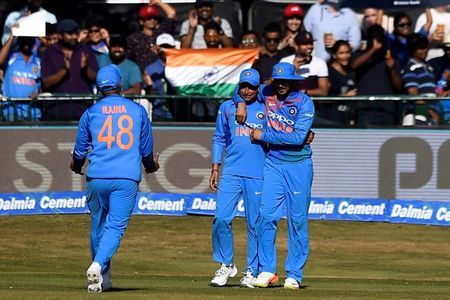 MALAHIDE (Reuters) - India warmed up for their tour of England with a crushing 143-run victory over Ireland in the second Twenty20 international in Malahide to win the series 2-0. It was the joint second highest winning margin in a Twenty 20 international and set India up nicely for tougher games against England. “Just the right kind of momentum we needed. Pretty happy that we got in balanced performances,” India captain Virat Kohli said. “For us the opposition does not really matter. We know if they come hard, we have the batting power to go hard as well. Plus we have to wrist-spinners. It’s going to be a competitive series against England.” India opener Lokesh Rahul top-scored with 70 and Suresh Raina made 69 as the visitors got off to a flying start despite the loss of Kohli for nine. They piled up an impressive 213 for four in 20 overs after Hardik Pandya’s late blitz in which the all-rounder struck 32 runs off nine balls. Ireland crumbled with the bat, captain Gary Wilson top-scoring with 15 as they were bowled out for 70 in the 13th over. Kuldeep Yadav and Yuzvendra Chahal took three wickets each. India head to England for three T20s, three ODIs and five Test matches.