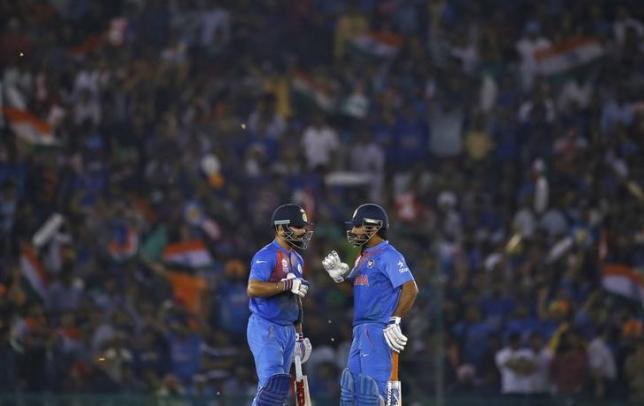 DUBAI – India will begin their ICC Champions Trophy title defence with a mouthwatering Group B clash against arch-rivals Pakistan in next year's tournament in England, the International Cricket Council (ICC) announced on Wednesday. Second in importance only to the World Cup and featuring the top eight teams in the world, the 2013 edition was supposed to be the last but the ICC decided it should continue. The eighth tournament will feature 15 matches across three venues in England and Wales with The Oval hosting the June 18 final. Hosts England will take on fast-improving Bangladesh in the June 1 opener, also at The Oval, according to the fixture schedule announced on Wednesday. Group A also contains twice winners Australia, who begin their campaign against trans-Tasman rivals New Zealand in a repeat of last year's World Cup final in Melbourne in which the hosts prevailed. Apart from India and Pakistan, Group B also includes former champions Sri Lanka and South Africa. The top two from each group progress to the semi-finals at Cardiff and Edgbaston on June 14 and June 15 respectively. "Having won the event in 2013, we know how intense this event can be and we are under no illusion that it will be any different next year," India captain Mahendra Singh Dhoni said in an ICC statement. "In the ICC Champions Trophy, it doesn’t matter which other sides are in your group or who your semi-final or final opponent is. "You have limited time and the key to success is consistency, and being on top of your game each time you step out on to the field. There is very little room for error." England are hosting the tournament for the third time, having reached the finals in 2004 and 2013. "The ICC Champions Trophy is an elite ODI competition, contested by the sport’s top eight ranked sides featuring the finest 50-over cricketers," England captain Eoin Morgan said. "As professionals, we want to be involved in such intense competitions where our individual and team skills are tested almost each day." Group A: Australia, New Zealand, England, Bangladesh Group B: India, South Africa, Sri Lanka, Pakistan. –Reuters